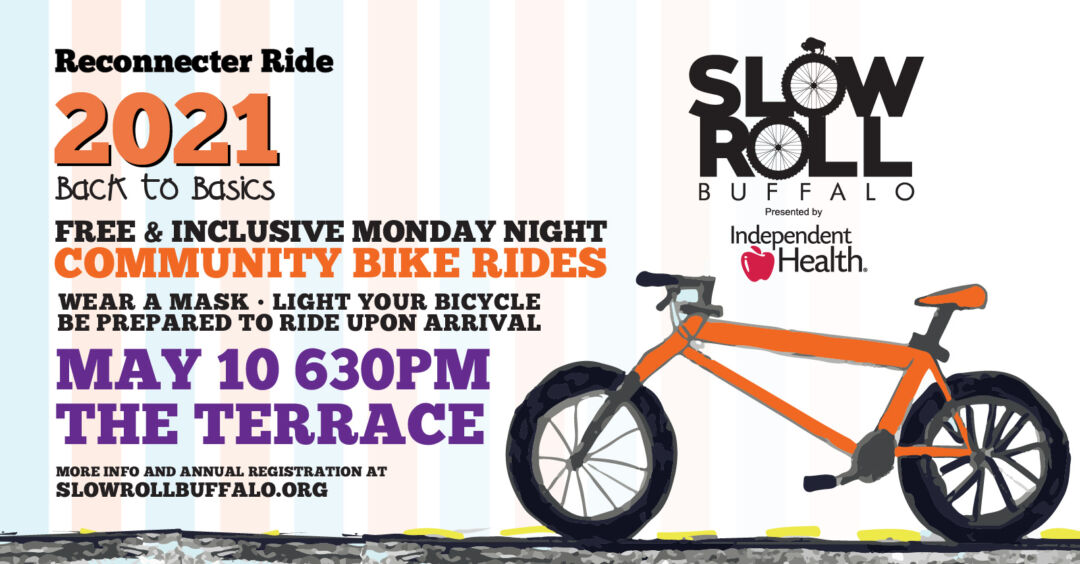 Our second free and inclusive Monday night community bike ride of 2021 brings us back to the Terrace at Delaware Park, where we started our 2016 season with our biggest ride to date, taking over the Scajaquada Expressway to advocate for revival of the Scajaquada and Humboldt Parkways - two world-renowned Olmsted-designed connecters that were destroyed to build disconnecting highways through the heart of Buffalo. That fight against the car-centric mindset of the New York State Department of Transportation continues with this coming Monday's Reconnecter Ride, spotlighting the advancing "One Road" advocacy of both the Restore Our Community Coalition and Scajaquada Corridor Coalition, both of which include Slow Roll Buffalo - together last week, we renewed our calls for parkway revival, joined by elected officials including Congressman Brian Higgins, who called for the ideal solution that would "rip out the entire expressway, end-to-end, root-and-branch." Our 10-mile route will stop in the Hamlin Park and Trinidad neighborhoods that were severed by the destruction of Humboldt Parkway, including neighborhoods Kingsley, MLK Park, Parkside and Park Meadow along major streets Forest, Delaware, Delavan, Humboldt, Fillmore, Kensington and Parkside. We'll return to the Terrace in Delaware Park for our Buffalocal afterparty with food, music and [...] 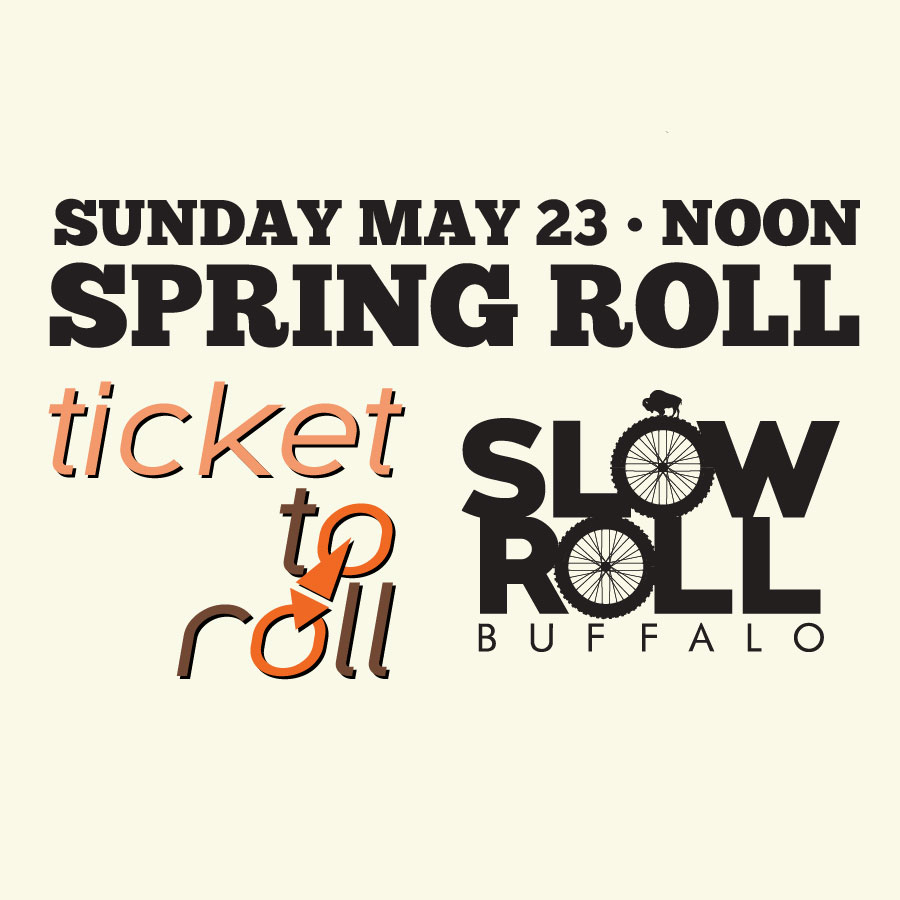 Limited Capacity! First in our new Ticket to Roll series of monthly fundraiser rides, the Spring Roll is a guided ride focused on Buffalo's Asian-American communities past and present, concluding with food and drinks. Purchase of a ticket includes the roundtrip ride, dinner and refreshments courtesy of Sun Cuisine, a commemorative "Ticket To Roll" T-Shirt and more. All proceeds go to keeping Slow Roll Buffalo free for all. 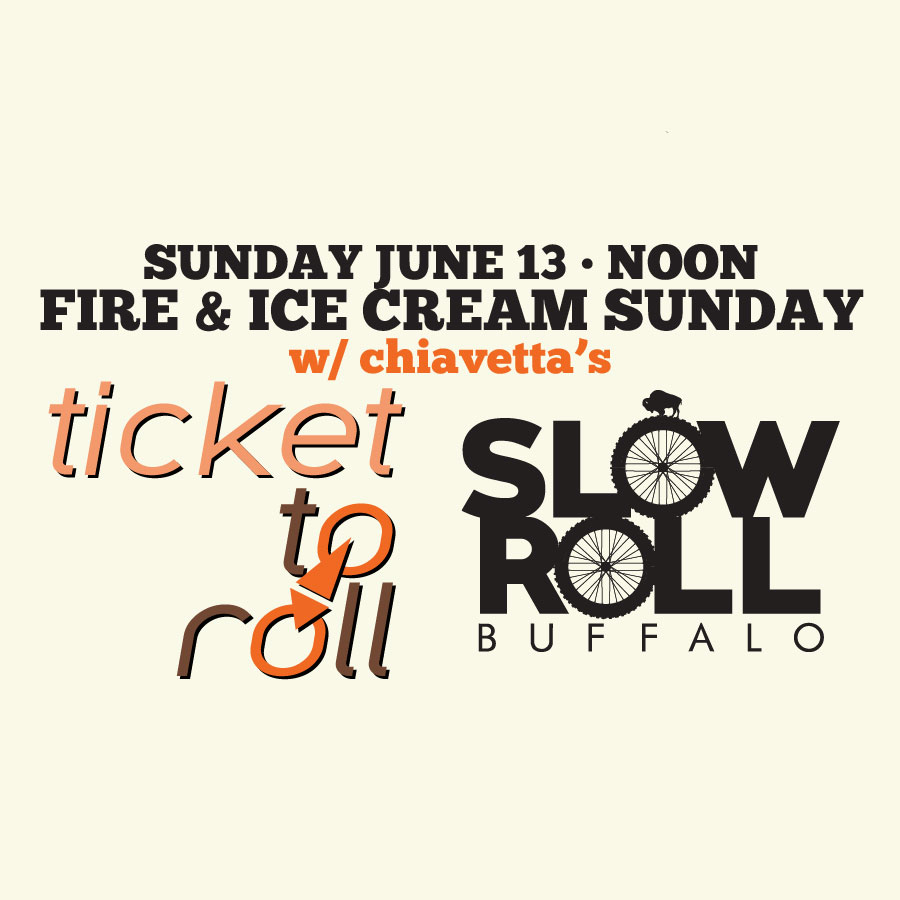 This new monthly series of fundraiser rides is limited in capacity, offering a different kind of experience with proceeds helping keep regular Slow Roll rides free and open to all. Early bird tickets are available now. A fully involved house fire of a guided ride passing Buffalo Fire stations throughout the enture city. This 35 mile roundtrip flashover also works in an ice cream stop midway and a Chiavetta's and beer dinner package back at the start point. Ride at noon. Chicken and beer 2-6pm. Purchase of a ticket includes the roundtrip ride, ice cream stop, a Chiavetta's chicken dinner, a commemorative 2021 T-Shirt and more. Chicken only and chicken and beer tickets are also available. All proceeds go to keeping Slow Roll Buffalo free for all. 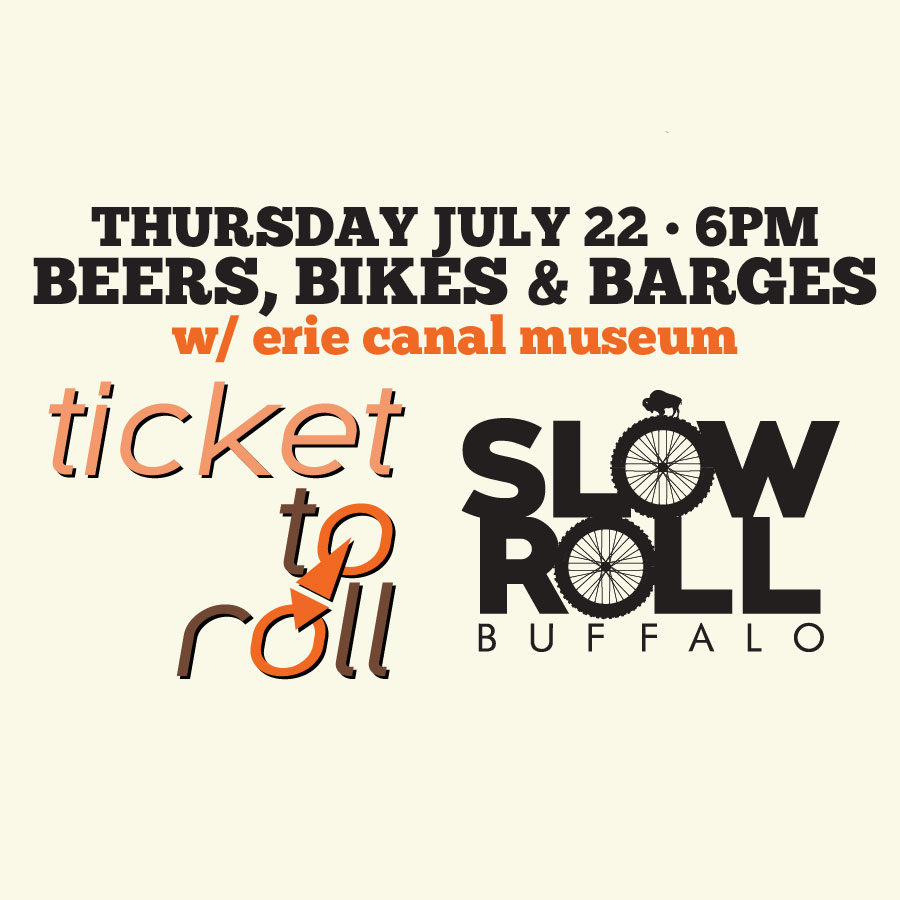 Limited capacity! Experience Erie Canal history by bike, then enjoy a pint in this statewide summer series along New York’s Canals! On Thursday nights throughout the summer an hour-long guided bike tour will take guests along the new Empire State Trail while also highlighting the regions’ unique Canal history. Following the tour, join your fellow cyclists and brewery founders for a complimentary drink at our participating brewery. Participate for one night at your favorite local spot or try to complete the entire statewide circuit. Please register in advance to participate. Registration is $25 per ride. Visit all 7 participating breweries in 2021 throughout New York State to receive a prize! The Buffalo edition of Beers, Bikes and Barges will begin at the Longshed @ Canalside and meander through the city for guided tour (~6 or 7 miles) along the site of the historic Erie Canal and ending at Big Ditch Brewing for any afterparty.  Purchase of a ticket includes guided ride, a beer at Big Ditch, a commemorative "Ticket To Roll" T-Shirt and more! 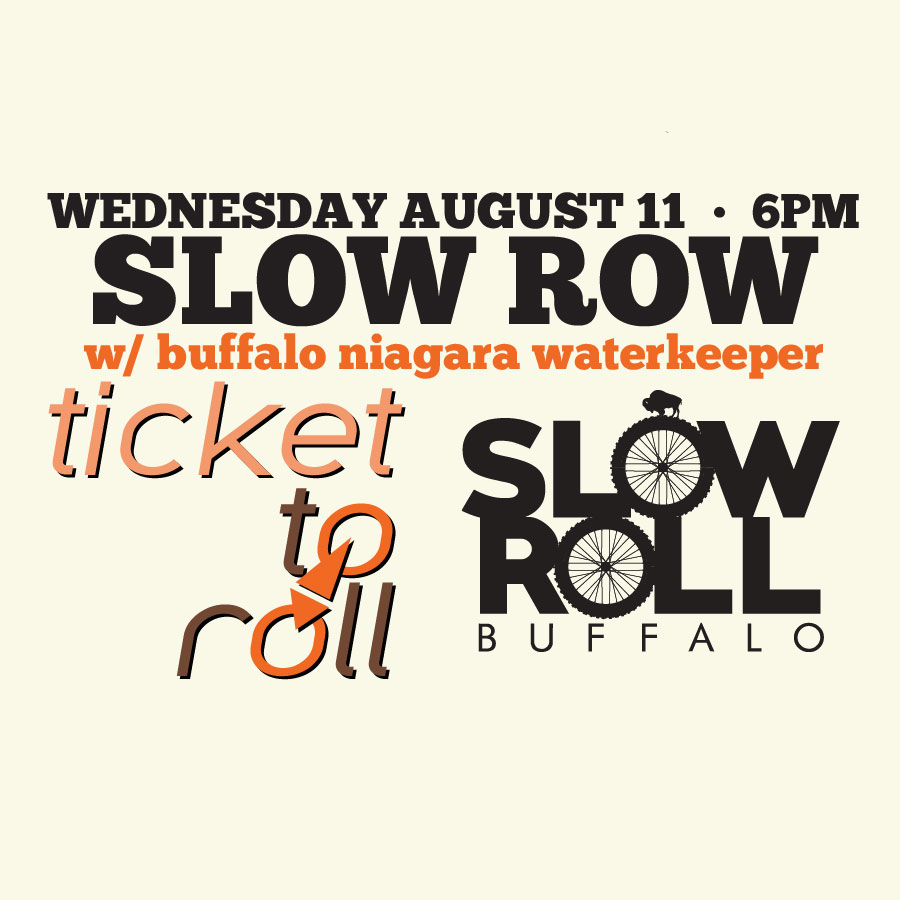 Limited Capacity! Join Slow Roll and Buffalo Niagara Waterkeeper for a night of bicycling, kayaking and fellowship on the Buffalo River! The full experience includes a guided ride along the river, open kayaking with designated stops to learn about Waterkeeper's work to transform the once-dead river into a revitalized destination, and an afterparty with food and drinks. You can choose to only paddle, or only pedal, or both! Purchase of a ticket includes the ride (kayaks provided), refreshments, afterparty, a commemorative "Ticket To Roll" T-Shirt and more. All proceeds go to keeping Slow Roll Buffalo free for all. 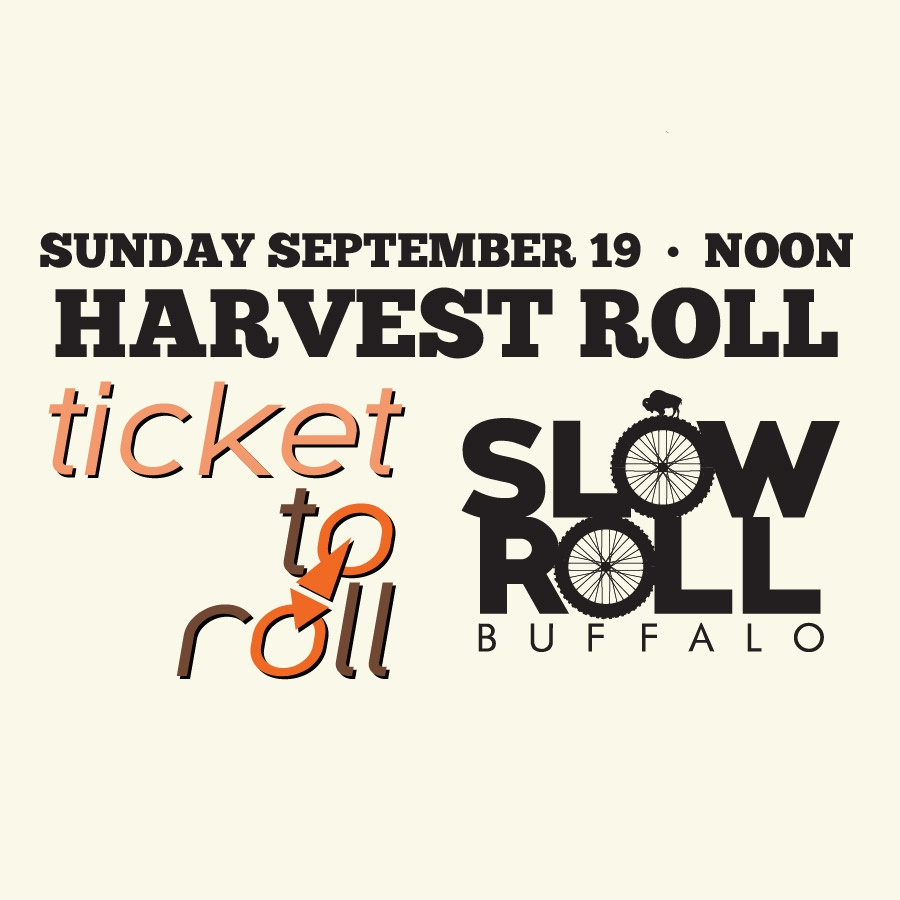 Limited Capacity! The Harvest Roll will pick up where the annual Tour de Farms left off with a guided ride around our local food systems, including both urban and rural farms and an afterparty with food, drinks and fellowship. Purchase of a ticket includes the ride, refreshments, afterparty, a commemorative "Ticket To Roll" T-Shirt and an option for a local produce box. All proceeds go to keeping Slow Roll Buffalo free for all. 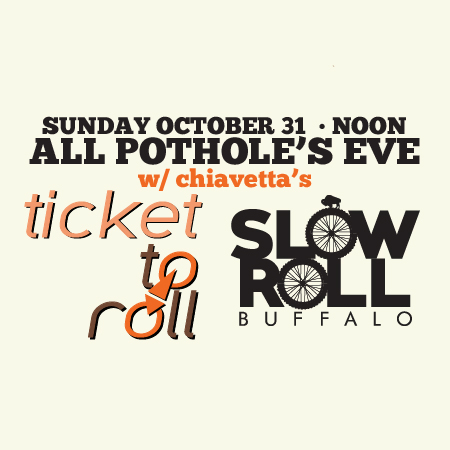 Limited Edition! A ghoulishly-guided 30ish-mile roundtrip ride along with a Chiavetta’s dinner and stops for treats. The ride will begin at noon, with dinners served from 2-6pm. Purchase of a ticket includes the ride, Chiavetta's chicken dinner, beer, afterparty and a commemorative  T-Shirt. All proceeds go to keeping Slow Roll Buffalo free for all.