*** We will resume public group rides when the public health leaders advise. ***

This event has passed. 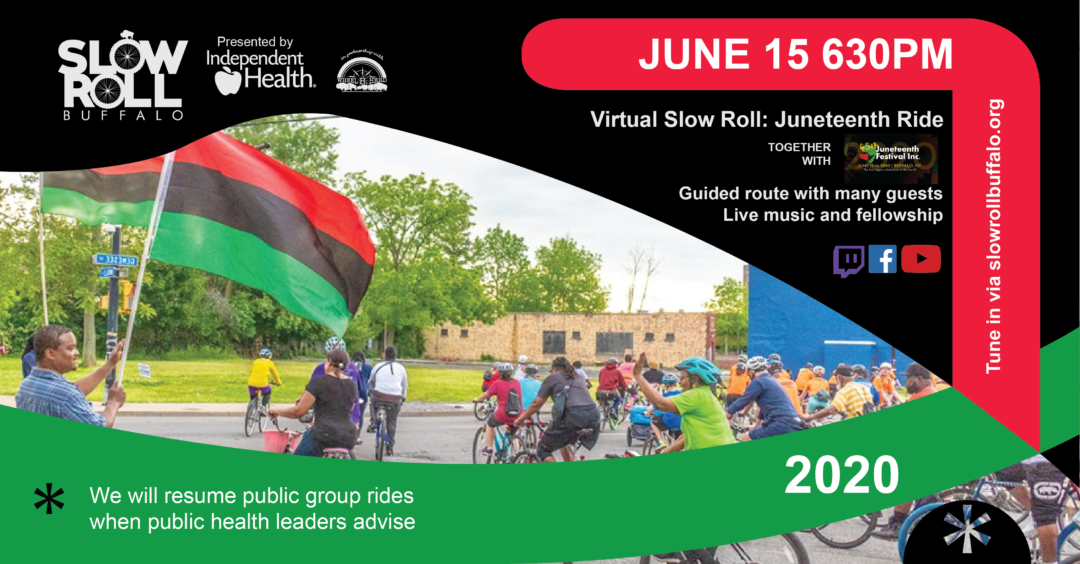 Juneteenth is the oldest known observance of the ending of slavery in the United States. According to historical records, the celebration began on June 19, 1865, the day Major General Gordon Granger of the Union Army rode into Galveston, Texas, in final execution of the Emancipation Proclamation.

The Juneteenth of Buffalo Festival was started in 1976 by B.U.I.L.D., a community-based organization, as a culturally relevant alternative to the country’s Bicentennial Celebration.

While the ongoing public health crisis is preventing Slow Roll Buffalo from bringing big crowds together for free and inclusive community bike rides, our Monday night gatherings have moved online.

For the virtual tour and ride, one Slow Roll squad member will ride with a camera mounted to their helmet, while hosts and guests will appear from home via teleconference. Upon conclusion of the ride, a virtual afterparty will feature live music and fellowship in partnership with Buffalo.fm and Band Together Buffalo.

2020 marks Slow Roll Buffalo’s seventh year of presenting free and inclusive community bike rides, rolling every Monday from May through October. Presented in partnership with Independent Health by the nonprofit volunteers of Wheel B. Herd, Slow Roll Buffalo is the largest franchise of the Slow Roll movement born in Detroit.