Part of The Ride for Roswell - more info at www.rideforroswell.org

Free bike ride around the Town of Tonawanda, new addition to the 12th annual Ride for Charity benefiting Make-a-Wish, a Friday-Saturday festival led by a motorcycle ride meeting in Sheridan Park with live music, food, drinks, raffles and auctions - more info at www.ride-for-charity.com.

Second annual celebration of the connection between the new Children's Hospital and Variety: The Children's Charity. Ride is free and open to all with many riders collecting pledges for the cause, afterparty at The Oakk Room - more info here. 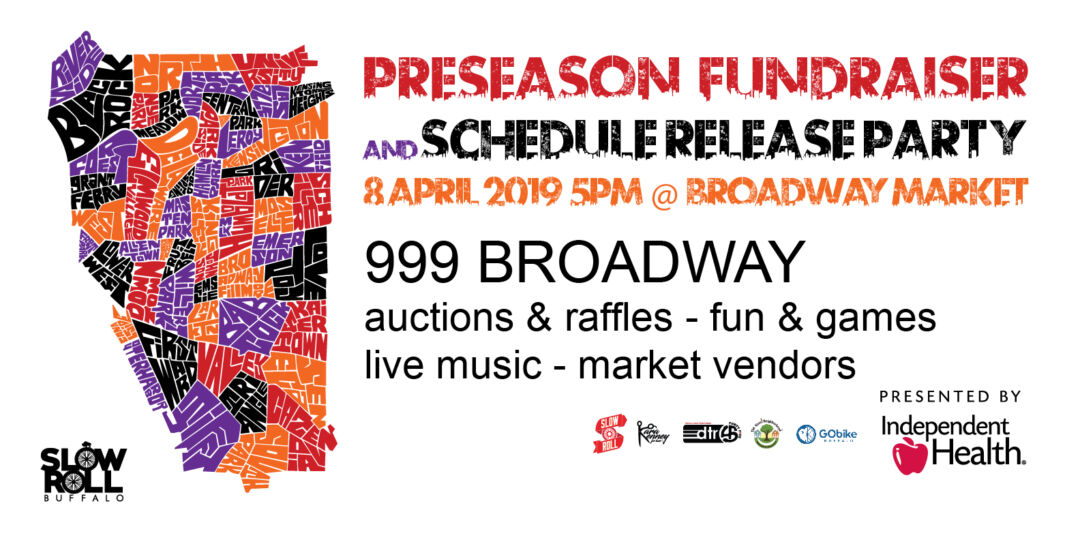 Join GObike Buffalo, Slow Roll Squad, and our presenting partner Independent Health in celebrating the release of our 2019 six-month schedule of free and inclusive community bike rides around Western New York for all ages and skills levels! More than 50 rides will be announced as part of a party at the Broadway Market (999 Broadway) on Monday, April 8th, 5-8pm. Admission is free to our Schedule Release Party, which will offer food and drinks, fun and games, live music and market vendors - with spring being peak season at the Broadway Market, many resident and seasonal vendors will extend their hours to participate in the party. Proceeds from auctions and raffles as well as sales of local beer, wine and spirits will help cover costs of keeping the upcoming rides free and open to all. In addition to new host venues for half of Slow Roll Mondays from May through October, there will now be another ride every weekend either in or beyond Buffalo including Skyride, GObike Buffalo's annual fundraiser on Sunday, May 19th. Full season posters will be available at the party, as well as new Slow Roll merchandise including USA-made hoodies and t-shirts, along with free giveaways [...]

GObike Buffalo’s sixth annual fundraiser bike ride providing riders the opportunity to explore the past, present and future of Buffalo’s roadways through a ride highlighting our legacy highways—the Skyway, Scajaquada Expressway, and Kensington Expressway.   More info and registration at www.skyridebuffalo.org

A charity bike ride that brings people together to celebrate survivors, pay tribute to those we've lost and share in the passion that connects us all: finding a cure for cancer. More info and registration at www.rideforroswell.org

Join us at Kerns Ave Bowling Center for our third annual Slow Bowl fundraiser! No ride for this gathering - just a fun and informal afternoon of bowling, fellowship, food and drinks. The only formality - a Beat the Champ contest against squad member and 300 club ring-holder Ricky "The Ringer" Singer! - $10 donation includes 2 games and shoes. - Lottery Board - $50 in lottery tickets to the winner (winner need not be present) - $5 to enter Beat The Champ - top score overall to complete against The Ringer, grand prize awarded to the winner - Kerns kitchen open including famous jerk chicken and full bar.

Join us at Flying Bison for food, drinks and fellowship as we reflect on our 2019 season while raising funds to cover its costs.