Get to Know Cariol Horne

Get to Know Cariol Horne

Before our free and inclusive Cariol’s Ride this coming Monday, October 12th, starting from Big Ditch Brewing Company (55 East Huron Street, 6pm start, see below for many pandemic-induced changes to Slow Roll) and ending at City Hall, let’s get to know Cariol Horne, the former Buffalo police officer who was fired after a 2006 incident in which she intervened in the choking of Buffalonian Neal Mack by her fellow officer, who has since served jail time for a separate incident in which he brutalized Buffalonians.

First, a little story about Cariol and Slow Roll – she first rode with us in 2017, when we asked her to speak to our riders in the wake of the deadly white supremacist rally in Charlottesville. After sharing some of her personal story, Cariol called on the crowd to chant, “Love, not hate, makes America great!” And so, we did. It was a positive and powerful moment that, of course, was met with resistance from some who want Slow Roll to be just a joyride, free from the discomforts that so many in our community lack the privilege to ignore. We reject that privilege.

This is our second Cariol’s Ride and first open to the public – like the virtual Cariol’s Ride we presented back in June with just Cariol and our volunteer squad, our 13-mile route will trace Cariol’s history, all on Buffalo’s East Side, from her childhood home on Madison Street where she learned how to ride a bike to the Walden Avenue house where she saved Neal Mack.

While the time since that virtual ride has included the Buffalo Common Council passing a partial version of Cariol’s Law – “a proposal for legislation to have a mandatory stature on police bystander intervention, provide protection from retaliation, require external investigation with mandated reprimanding for abuse or misconduct, and create a required reportable registry” – Mayor Byron Brown has so far refused to sign it, and the restoration of Cariol’s pension persists in the struggle to make her whole.

These circumstances make this Cariol’s Ride both a celebration of the progress made to date and a call for help to keep it going – please read below to get to know Cariol, and join us for the ride on Monday night. 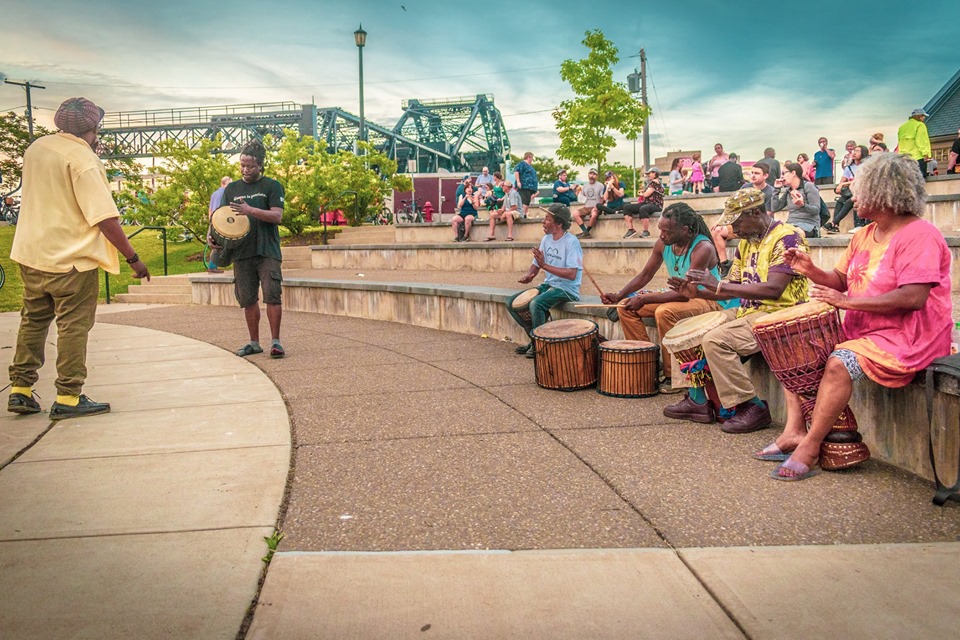 Cariol has been part of many Slow Rolls, from speaking at mass-ups to drumming with Ismail & Company at our afterparties, such as here in Broderick Park in 2019 – photos by Clay Davies

What inspired you to become a police officer?

I had two sons I had to take care of, and so I took the test and passed it. And because Judge [John] Curtin had ruled that the city had to hire more minority officers, I was able to get on.

How did the incident around Neal Mack change your life?

I lost everything, financially.

It made me want to create change, because I know what I saw on the job was not what I signed up to do. I signed up to help people, not destroy lives.

How have you and Neal Mack formed a bond from that incident?

He would be upset – like when I lost my job and pension, he would feel responsible. But I told him, “No, it’s not your fault – I did my job, I did what I was supposed to do. You were the one who was the victim.” It’s not his fault that the police were bad.

He’s still traumatized about it. He got screwed over because the cops lied. He lost his lawsuit. Neal Mack needs his justice, too.

The first time we did Cariol’s Ride, someone approached you outside Neal Mack’s old house on Walden and thanked you for saving him from trouble when you were called to break up a bar fight. He said you had him sit down in the back of your patrol car and calm down, or else you’d have to close the door and take him downtown. He said if you hadn’t calmed him down, he would’ve wound up in the legal system and down a bad path, but you saved him from that. How did that make you feel, to be approached like that out of nowhere and told you were a good cop?

It made me feel that the job that I did was worth it. I have had many people come up to me and say things like that, because like I said, I wasn’t on the job to ruin lives – some people were, and that still makes me worry. Today is my son’s 16th birthday, and I worry because now the police can put him in jail – when my other son turned 16, he was falsely locked up.

So many more people know about your story – and how it’s affected your family – over the past few months. How has it felt having so much more attention and progress after all these years?

It feels like I’m fighting a fight that my grandparents have fought, and I don’t want my grandchildren to have to fight the same fight.

I’m a mother and grandmother. My kids are the reason why I have not stopped this fight. I don’t want them to fight the same fight that I’m fighting.

My six-year-old grandson said the other day, “Grandma, can I go out protesting with you?”

I do like to keep activism fun, though. We can work on these serious issues without getting a migraine every time. Even though we have our differences, as long as we have a common goal we can work with different people. We don’t have to go home with each other, but we do have to create change for the betterment of our communities so that our grandchildren won’t have to fight the same fight that we’re fighting.

When we’re doing peaceful protesting, when we’re just giving our message, although we’re serious, it can still be fun. And when I say fun, I mean, like, we can sing, we can dance – we don’t have to have hate in our hearts to get our message across.

In your opinion, what is Buffalo’s greatest asset and its most urgent problem?

Buffalo’s greatest asset is the activists who care about the community – they speak up for things that our community needs most.

Our most urgent problem is the mayor not listening to the people.

How can people get involved in Cariol’s Law?

Go to www.cariolslaw.com and sign the petitions. We also have a Gofundme on the site – funds are getting low, and I wanna take Cariol’s Law to all 50 states. 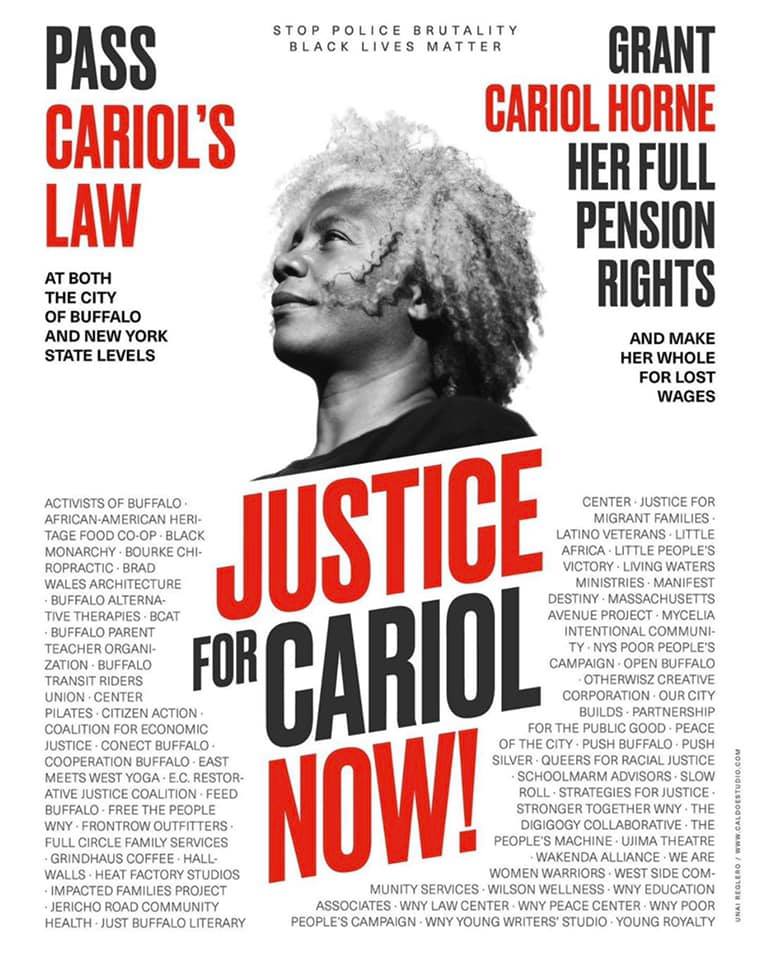 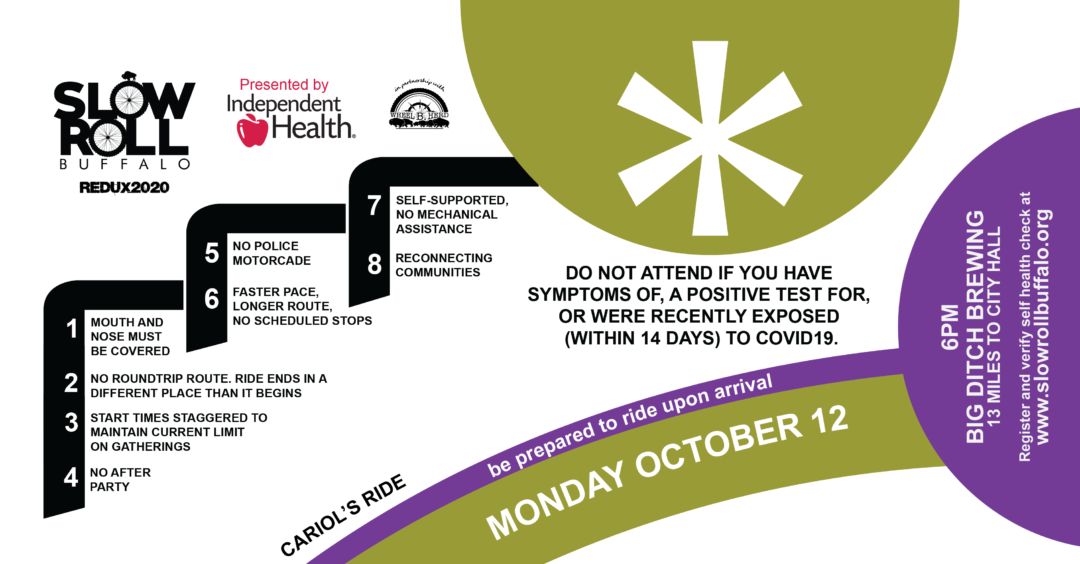