Get to Know Simon Husted

Get to Know Simon Husted

We first met Simon Husted in the heart of our herd, loud and proud; for years, he’s been exuberantly riding with Slow Roll and the East Side Bike Club, staying for the afterparties, spreading the good word, and showing up for fundraisers and other events promoted through ours.

Our Southside Summer Sunset Ride this coming Monday, August 31st, rolling from the Niagara Frontier Food Terminal (1500 Clinton Street, Clinton-Bailey, 6:30pm start, see below for many pandemic-induced changes to Slow Roll), will include Simon’s stomping grounds of South Buffalo, where he was born and returned after being raised in West Seneca and schooled in Ohio.

While Simon makes his livelihood managing a small real estate company, he makes his name more as a board member for Buffalo Transit Riders United, an arm of the Coalition for Economic Justice that organizes transit riders for a more equitable and responsive public transit system by pressuring decision-makers and exposing injustices.

Get to know Simon below and by easily finding him on our rides!

My interest in effectuating community change in social justice was seeded while I worked as a news reporter in college and then at a small daily newspaper.

In college, I was heavily involved in LGBTQ rights in Ohio between 2008 and 2012. I was editor-in-chief of Kent State University’s LGBTQ Magazine, and participated in almost every program by the campus’ LGBTQ & Ally student organization.

I then got hired as a reporter at the News-Herald near Cleveland, and not long after, I was covering the US Supreme Court’s decision legalizing same-sex marriage nationwide and how that was affecting the couples living in my rural and suburban beat. I often remember how awestruck I was about how quickly people changed their attitudes regarding the LGBTQ community in those short few years.

There’s still plenty of room for progress to be made, but it was an example of the impact made when members of a marginalized group open their lives up to strangers and acquaintances, challenging perceptions and ignorance. For some friends and family members, I played the unintended role of being the person they thought of when the subject of LGBT rights was brought up.

Nowadays, I focus most of my time rallying around mobility justice and transit justice. Unlike most social justice causes, the subject of mobility and transit access is more nuanced. It’s very simple to understand why a same-sex couple deserves the same rights as a married man and woman. However, it’s tough to express the value of supporting businesses at the Southgate Plaza in West Seneca because it is served by two bus routes, versus Quaker Crossing, which has grown at the expense of the McKinley Mall and is served by no bus routes. It’s challenging, because the message is never simple to the casual observer, and bus users don’t wear a badge about their mode of transportation, or host festivals celebrating their community. 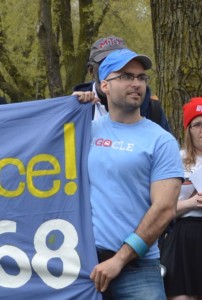 How do you advocate for our community?

Back in Ohio, I would regularly meet with a mentor who was the press secretary for a former Ohio Governor. I would discuss my efforts back then of joining a handful of other bus riders in forming Clevelanders for Public Transit; I asked how helpless I felt about effectuating change in Ohio, a state that routinely spends more money cutting the grass of its highways than contributing funds to its various transit authorities, and her response surprised me. Although she is a policy wonk, she advised there is nothing better you can do than make noise as loud as you can.

When you’re fighting for resources in the public sphere, it’s easy for decision-makers to push your needs to the back burner if you stay quiet and be nice. That’s the paradigm I apply every time I fight for Buffalo Transit Riders United.

What part of BTRU’s mission and work resonates most with you?

Buffalo Transit Riders United is all about fighting for the transit riders of today. Not the theoretical transit user of next year or next generation. Nor are we fighting on behalf of a passenger railroad hobbyist. Bus lines are people’s lifelines to work, family and errands. Our mission is to lift the voices of today’s riders so that they are at least on par with the voices of motorists expressing their need to find nearby a nearby free parking space to their destination. We have a long way to go, but we are getting there, steadily.

How does this work align with that of Slow Roll?

BTRU’s mission absolutely aligns with Slow Roll, and not just because many people like myself are bus users and bicyclists. Slow Roll is inspirational because it has fueled a culture and perception shift in Buffalo – as well as other rust belt cities. A decade ago, many observers saw people pedaling on the streets as an unfortunate byproduct of poverty or a suspended drivers license. It was a sign of personal failing. Slow Roll has challenged people to think of how they can get around town. Not every trip, commute or errand needs a car. Now bicycling is seen by most people as a lifestyle of selflessness and healthy living. It would be great if bus riders could challenge the perceptions the community at large and decision makers have of them. 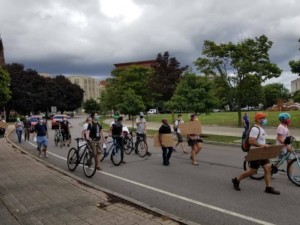 In your opinion, what’s Buffalo’s greatest asset and most urgent problem?

Buffalo’s greatest asset is its location in the heart of the Great Lakes. This area was naturally designed to be a resilient and thriving city protected from wildfires, hurricanes, tornadoes, earthquakes, and fresh water scarcity. The tradeoff is a few lake effect snow storms every year, and that’s fine.

Our most urgent problem is building local community wealth. Some decision-makers may think luring a Fortune 500 company to the area is the solution. That would be nice, but it’s not a complete solution. We need to find and fund more ways of helping people turn their paycheck income into longterm wealth. One way of doing that is avoiding the cost burden of buying, fueling, insuring and repairing a depreciating asset like a car.

How can people get involved in your work?

People can get involved with BTRU by messaging us on Facebook or emailing us at BTRU@CEJBuffalo.org – also welcome to email me at shusted13@gmail.com. Our next general meeting is Wednesday, September 16th, 5:30pm, over Zoom. 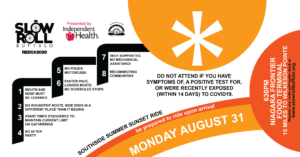