Home/News/Welcome to Grant Street
Previous Next

Tonight’s livestream Virtual Solidarity Roll, cohosted by PUSH Buffalo and starting at 6:30pm here on our homepage, will begin outside PUSH’s Mutual Aid Hub in their 429 Plymouth headquarters and roll out on a West Side route including highlights from PUSH’s history as well as the southern half of Grant Street.

Within Buffalo’s West Side, Grant Street is “kinda like the equator,” as lifetime resident and PUSH Workforce Coordinator Rodney Rainey explains below. It stretches north-south from Hampshire Street at its southern end – West Side Bazaar is at 25 Grant – to Military Road in Black Rock at its northern end, where The Showplace Theater is at 1065 Grant.

According to GObike Buffalo, which in partnership with many stakeholders has begun a major project “to align the streetscape to support the residents, community, and businesses in the Grant Street area” – all welcome to participate in this Grant Street Streetscape Survey –  “based on counts conducted by GObike Buffalo on Grant Street at Lafayette, more than 1100 pedestrians and 300 cyclists pass by this intersection per day. The average daily bus ridership is 4,000 people per day in the Grant Street corridor, according to NFTA ridership data.”

Get to know a bit about Grant here through Rodney and another longtime resident in Abdalla Mohamud, and join us live tonight as we discuss scenes streamed by one *Solo* Roller in our squad member and fellow Grant Street stakeholder Stephanie Cole Adams, who waxed poetically about the street here. 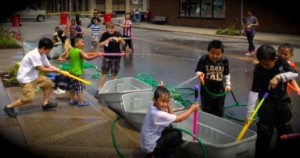 A scene from the annual Burmese Water Festival on Grant, by Stephanie Cole Adams

Abdalla Mohamud met the love of his life in Somalia; together they have five children. Collectively they all migrated to the US, where he lives a life filled with love and laughter. In Somalia, his extended family members and friends were all in close proximity, they shared many memories, and one of the difficult choices he had to make was to leave it all behind to start a new life. And he did it because of his children. He didn’t want them in a war-torn country, and hoped for a brighter future for them.

30 years later, he continues to work everyday as President of HEAL International, his wife Zahra works for Jericho Road Community Health Center, and his children are all adults with families of their own and successful careers. The journey was tough, but the Grant Street community allowed him to cherish his memories and build new memories.

How were you welcomed to the Grant Street community?

It’s good! Nice neighborhood, nice people. When I first came it was a different area – Grant was more Italian people. Now, many of them moved to North Buffalo and the suburbs, and now Grant is also many immigrants, Hispanic, many different people and languages – different music, too.

I remember one time when I first came here, we had a lot of snow – I’d never seen snow. Every hour or half-hour I would go to my window and look outside and see more snow. I didn’t know anyone – and if you don’t know anybody, it’s tough. Then I saw an organization called International Institute – they came to my house and said your food is here, stay here. And I’m still here. And it’s good. I’m a survivor. And now I’m a homeowner, and I’m working. It’s nice.

How is HEAL helping people in our current crisis?

HEAL is helping a lot. One week ago, we fed 300 families. We’re also helping people with emergency legal help, and help communicating with the government. A lot of people need food, need help, need delivery. 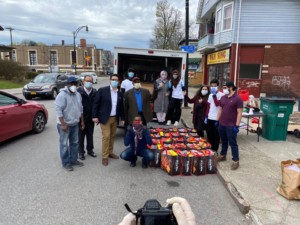 Has HEAL been working with PUSH?

Oh yes, PUSH does good stuff, really. They do a lot of things for the West Side community, especially in housing.

We now turn to Rodney Rainey, who’s lived his entire life within a block of Grant Street.

How do you reflect on growing up on Grant Street?

Grant has become more diverse. It’s the centerpiece of the West Side – if you think about it, it’s kinda like the equator. Gas station, bank, pharmacy and stores – there used to be more stores. It was different when I was younger – there was always an older brother saying, “Go home,” or “Go to school,” now they’ve either gone to jail or moved out of town.

How have you gotten involved in the Grant Street community?

I started with the mayor’s summer youth work program, then got in with Americorps. Before PUSH I was with Mass Ave Project’s Growing Green program, they took us all around Mass, Grant.

Even in the summer youth community service, stuff like cleanups, people you know would see you and be like, “Oh, what’s up, how you doing?” And I’d say, “You know, I’m tryna work.” Tryna put a bug in people’s ear with info I knew, that helped me through – learning who did what, who’s the bad guys and good guys.

I went from Americorps to PUSH’s Youth Build program, and this year I started as a full- time Workforce Coordinator. I help people find the right jobs they need through one-on-one discussions, whatever it takes to help and satisfy them. It took time to learn how to communicate with random people I don’t know yet, but part of my strategy is balancing evaluation of my own attitude in order for me to talk to other people and their attitudes.

We’re taking it from the ground up, getting referrals from downtown in the Buffalo Employment Training Center. Or people call, and we let em know which jobs are available. Tryna get PUSH Blue rejuvenated again. Tryna build a new workforce and a functional hiring hall for people to come and understand, and to learn about the climate, too, how important it is to connect with the work. I even got to go to Albany and actually speak there about the Climate Leadership and Community Protection Act, explaining how the workforce would benefit from it, teaching people about how it all relates to the environment.

At first I was like, “Who would’ve known I’d become a workforce coordinator?” Then you start to feel it, start to get the joy – I actually had people last year that got jobs through this, and I felt good about that. It’s just the beginning. 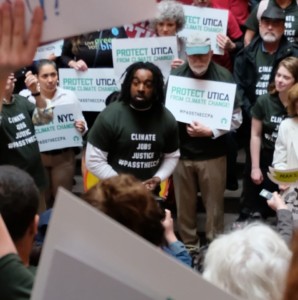 Rodney in Albany advocating for the CLCPA 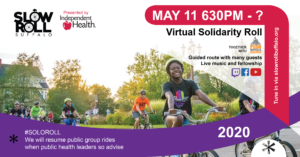