Our Buildup Buffalo Ride this coming Monday, October 21st – 6pm sharp start – marks our first ride starting and ending in Kaisertown, thanks to an invitation from Lisa Menchetti and Buildup Buffalo, who partnered to revive a building on 1840 Clinton Street in the heart of the neighborhood, including a welcoming mural by Vinny Alejandro. Learn more below, get on your bikes and join us!

When was the building at 1840 Clinton built, and how did you come to own it?

To my knowledge, 1840 Clinton Street was built in 1972. It was run as Nancy’s Hair Salon from 1974 until I purchased it in 2015. At the time I was living in Kaisertown and was looking for a small building to use for my own small business purposes. Since that time it has undergone a renovation, in part using Buffalo Billion Main Street Initiative grant funding.

What led you to partner with Buildup Buffalo?

I had been following Buildup Buffalo since its inception on social media. I loved that Maggie and Erin spoke about walkable neighborhoods and building relationships between property owners and small businesses, nonprofits, and startups. I think that leasing a commercial building can be an overwhelming task for property owners who don’t necessarily work in real estate as their career, and they have really mastered this niche in a way that benefits the property owner, the tenant and the neighborhood. 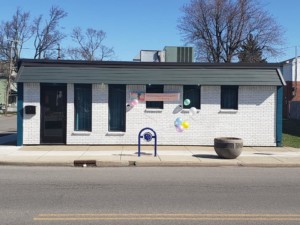 What inspired you to create the Kaisertown mural, and how did it come together?

1840 Clinton Street is a relatively nondescript building, with the majority of the building made of cement and concrete bricks. The generic exterior of the building definitely was one of the reasons I felt a mural would be ideal. The building is also located at the corner of Clinton and Weiss Streets, which makes it a very visible intersection. Kaisertown doesn’t boast many examples of public art, with perhaps the only exception being the mural on the side of The Edge Bowling Center. It seems like this was a perfect fit to decorate a rather dull building while adding public art to the commercial corridor.

Things really fell in place nicely when the time came to execute the mural. At the time, Cellino Plumbing was sponsoring neighborhood murals in conjunction with muralist and Kaisertown resident Vinny Alejandro from Urban Inspirations. The timing just happened to work out that the exterior renovations were coming to an end, and I jumped at the chance to have Vinny paint a Cellino mural on 1840.

I knew that I wanted to include a retro look to the mural, with flamingos. It’s my opinion that Kaisertown boasts a very retro/vintage vibe, and this is a standout quality for the neighborhood. Outside of a few parameters, Vinny had creative license to paint as he wished. I’m really pleased with the final result of the mural and the positive attention that it has brought to Kaisertown. Big shout out to Vinny and Lucas Cellino for their work and sponsorship!

What are your favorite fun facts that few know about Kaisertown?

If you haven’t been to St.Casimir, I really encourage you to pay a visit. It’s stunning. It’s tucked away on 160 Cable St. In 1976, the Archbishop of Krakow (better known as the future Pope John Paul II) celebrated a mass at St. Casimir. 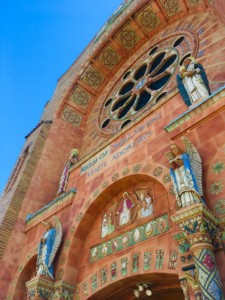 St. Casimir Church, as seen on an outreach ride along this coming Monday’s route by squad member Fr. Jud Weiksnar

Also, Beggar’s Night! October 30th every year turns Kaisertown into a hotspot. Kids flood into the neighborhood from surrounding areas to trick or treat the night before Halloween. Houses in Kaisertown have thousands of trick or treaters during Beggar’s Night. The Buffalo Peacekeepers come to Clinton Street to help move people safely around the neighborhood. It’s one of my favorite nights to be in Kaisertown all year.

And Snowvember in Kaisertown was really something to witness. We happened to catch the full six to seven feet of snow. Most of the neighborhood was snowed in for five days. It was some of the most neighborly behavior I witnessed while living there. Neighbors talked to each other and helped each other. It was a crazy week, but I’m happy to have experienced it. 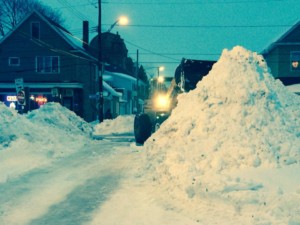 What should Slow Rollers expect from our first ride starting and ending in Kaisertown?

Kaisertown is an often overlooked part of the city. It’s actually a really cool area – centrally located to all of Western New York with a very intact built environment. The neighborhood is very walkable and family-friendly. It also is a short bike ride to loads of other areas – Larkinville, the First Ward, South Buffalo and Lovejoy are minutes away.

Stakeholders in the neighborhood are hoping that the next couple years will lend itself to an increase in responsible investment. It’s an affordable neighborhood with distinct charm.

We hope that Slow Rollers start to include Kaisertown in conversation about neighborhoods in Buffalo and think of it as a place of potential – for living, visiting and business alike. 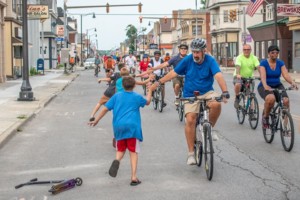 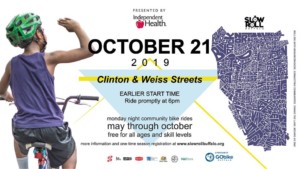