Warm thanks to all who welcomed us back to the Fruit Belt and joined in on our Dawn McCarley Memorial Ride as well as the post-ride block party on Mulberry Street, now an annual tradition since we’ve done it twice! It’s become one of our favorite rides of the year, between honoring our late squad member Dawn and building our bonds with Fruit Belt residents and the F.B. Community Land Trust.

Extra thanks to those who brought and took books to and from our little lending library on Mulberry, also named in honor of Dawn, who lived on Mulberry with her husband and fellow Slow Roll volunteer Earl McCarley. While Earl took the night off from riding in order to hold down a driveway fish fry with his Heavenly Eats crew, our squad family grew with another mother-daughter duo, as we welcomed Sara to the ranks joining her mom and lead team captain aka “belle of the ball” Angela! 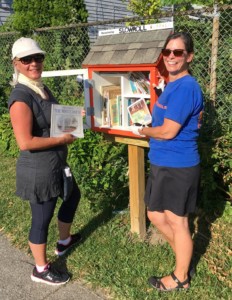 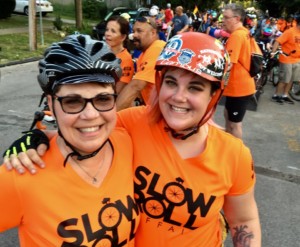 We rolled out of the Fruit Belt to the West Side, from Utica to Vermont past Connecticut Street Armory before stopping by Front Park. 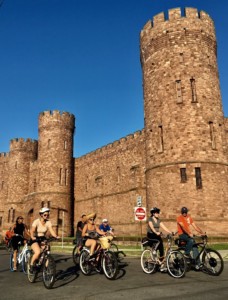 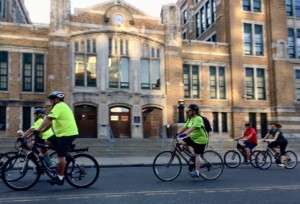 From Front Park through the Lower West Side and downtown, we rolled back into the Fruit Belt to stop by the building at 238 Carlton, corner of Locust, once left to crumble but now owned by our partner African Heritage Food Co-op, whose founder Alex Wright spoke to riders as the Kiddie Kickstand crew sold drinks, fruit and snacks and the masses.

Video of Alex addressing Slow Roll – “We’re bringing fresh fruit, vegetables and healthy offerings, in walking distance in a food desert…that place used to be an old grocery and deli 50 years ago – we’re bringing it back.”

This location is also where we staged our first GObike Buffalo pop-up office for the purpose of advocacy and outreach – on Wednesdays from 3-6pm, we’ll park our pop-up office in a spot along the coming Slow Roll route in order to engage the community about our mission to make our streets safer for everyone. Got an idea or issue? Stay tuned to our social media to see where we set up, and stop by! 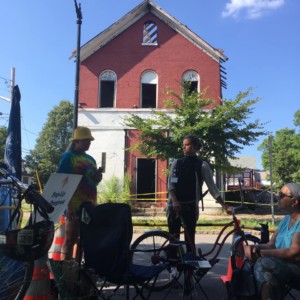 Out of the Fruit Belt again, we rolled to MLK Park and back via Best, Rich, Genesee and Michigan, greeted as always on those last two streets by many kids we’ve met over the years who we now see growing out of their training wheels and into our rides. 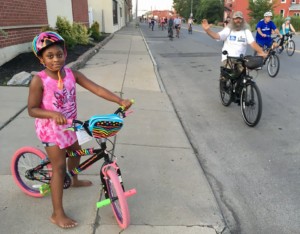 Returning to the Fruit Belt for our Buffalocal afterparty, the Mulberry block party was again set to the sounds of the Fruit Belt’s own Preach Freedom and friends, which this year included squad captain Weegie Vasquez – ask Weegie about his music background sometime, he’s a man of many talents! 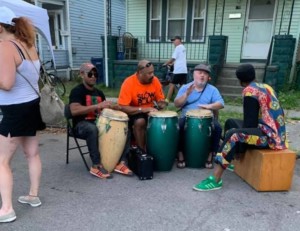 Now, we roll back to the West Side, as our 15th of 26 free and inclusive Monday night community bike rides brings us back to the Richardson Olmsted Campus, this time on the Buffalo State side by the historic barn at Rockwell Road and Rees Street – special thanks to the staff at Buff State for going out of their way to welcome us!

Next Monday’s ride is named for the just-announced Grant Street revitalization project spurred by state funding, and boosted by a grant from The John R. Oishei Foundation along with investment from Niagara District Council Member David Rivera for GObike Buffalo and Preservation Buffalo Niagara to provide an infrastructure and traffic analysis, an analysis of commercial and community assets as well as provide technical assistance for property owners.

In the meantime, there are a bunch of fun rides this weekend:

– Saturday, 10am: East Side Bike Club, rolling as always from the statue in MLK Park. 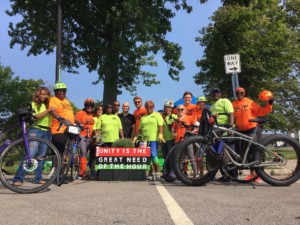 – Saturday, 11am: Riding along the inaugural Flutterby Festival on Elmwood Avenue, including a GObike Buffalo pop-up demonstration in front of Campus Wheelworks. We’ll meet at the new Chuck Tingley mural on Summer and Elmwood and ride up and down Elmwood between Summer and the Albright-Knox Art Gallery, checking on the various happenings of eco pop-ups, businesses, and organizations. There will be a kids’ bike rodeo, a Flutterby beer, a monarch butterfly farm, gardens planted, murals painted, eco cocktails, outdoor yoga, plein air painters, musicians, scores of earth friendly advancements and announcements and much more. The pace will be casual, following all traffic laws and being aware of both motorists and pedestrians. The route will simply be up and down Elmwood throughout the day. 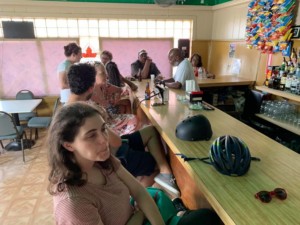 – Sunday, 1pm: Our annual Fire and Ice Cream Ride is a self-supported bike ride cruising past 25 Buffalo and Lackawanna Fire Department stations while stopping at local ice cream spots along the way. This will be about a 40-50 mile ride in total, with a faster pace and is classified as a “drop ride.” This is not a guided tour of any sort and riders should ride at their own pace, know their own way, and feel free to skip stations for a shorter ride. 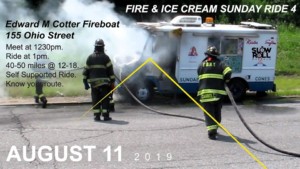 Get on your bikes and join us! 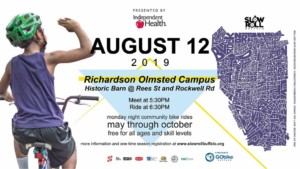