This coming Friday, July 12th, we return to the town Clarence for our second free and inclusive Clarence Pedal Party of 2019, this time returning to Murphy Brown’s Craft Beer Empourium (9500 Main Street, 7pm start), where we’ll return for an afterparty with a full bar including their vast expanse of craft beer along with food trucks Carnivorous and Akron’s Farm to Table Truck along with live music from the Riverdogs Blues Band.

Presented by Independent Health, this ride will be slightly longer and faster than a Slow Roll Monday, coming in at 13.5 miles with a couple inclines steeper than any in the city. Our squad members and weekend ride leaders Colleen Kendzierski and Weegie Vasquez have scouted this route and said it’s a dandy – starting on major roads Main, Transit and Sheridan before winding around neighborhoods.

Clarence has had some of the biggest turnouts of our weekend rides, and many of our Monday riders are part of making Clarence more bike-friendly, from new streetscapes and advocacy around initiatives such as the Amherst Peanut Line Trail Supporters to a new series of Saturday morning rides from the Clarence Hollow Farmers Market; to learn more about these and set the stage for Friday, read below from Discover Main Street leader Noel Dill.

What part of the progress toward a more walkable and bikeable Clarence are you most excited about?

The most exciting thing for me is seeing people choosing a bicycle as a way to get around and take in our town. We’ve been saying, “bike friendly is business friendly,” and that’s really apparent at the Clarence Hollow Farmers’ Market. It’s not just the growing numbers of folks coming out Saturdays at 9am for our group rides, although that’s encouraging. The real joy is seeing so many people come to the market by bike. The infrastructure is in place, since the market is New York’s first rails-to-trails Farmers’ Market, and to see how the Clarence community is taking advantage is very fulfilling.

Those Saturday morning market rides seem to be growing in numbers, eh?

Sure, we’ve had good success so far with our Market Rides, and people are starting to realize if they’re up and out on a Saturday morning they can join us. We’re really excited about the prospects of this event continuing to grow and create avenues for ordinary people to get back in touch with cycling in a friendly, inclusive way. But our goal is not just to have a series of fun rides. It’s to educate people about the joys of cycling, the “rules of the road” and to bring people to a point where they consider riding a bike for transportation as an alternative to some trips they may make by car. And that’s very visible at the Clarence Hollow Farmers’ Market. 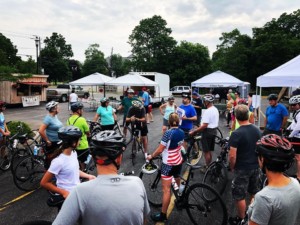 What inspires you personally to do this work?

In cycling, and in life, it’s about the places you go and the people you meet. Working on making our community bike-friendly began with cycling being such a natural fit for our Main Street commercial district, but it’s enriched my time with so many new friends from all walks of life who share a common interest. I’ve long believed that we are at our best when everyone is heard from, and this process is extremely collaborative.

How do you envision this Pedal Party advancing that work?

The Clarence Pedal Party is a large group ride, but with Slow Roll Buffalo’s help we’ve developed a reputation for orderly, well-managed rides that show the town in a good light. Many in town government have joined us and enjoyed the bike-friendly atmosphere, and the turnouts have helped to demonstrate broad community support for a bike-friendly Main Street. In response, the Town of Clarence has continued to show their leadership with support for bike infrastructure, including working with the New York State Department of Transportation (DOT) to ensure bike lanes are a part of several re-striping projects. Last fall, the first three miles of lanes were installed by the DOT from Transit Road to Sheridan Drive. This summer, a project to add a turning lane to Sheridan will add further connectivity by adding bike lanes from Transit Road to feed into the Main Street commercial district.

What should participants expect at this Clarence Pedal Party?

This route will be different than our past rides from Murphy Brown’s. We’ll spend the first few miles of the route on Main Street and Transit Road before turning northward and descending the escarpment into some uniquely-Clarence neighborhoods. There will be a couple of hills on this ride. Local Clarence riders and folks who have joined us before know what to expect, but if you’re new to the ride you will find a lower gear helpful as we climb up through the Spaulding Green neighborhood to Greiner Road and Kraus Road before we return down Main Street to Murphy Brown’s. When we return there will be food trucks, icy-cold craft beer and live music form the Riverdogs Blues Band.