Gratitude to all who made our second annual Freedom Wall Ride this year’s biggest Slow Roll to date! Especially to those who took time to take in the the sights at the corner of Easy Ferry and Michigan, 28 murals of local and national civil rights leaders.

Those who arrived early were treated to greetings from Freedom Wall (and Slow Roll Buffalo’s go-to) artist Edreys Wajed as well as honoree Eva Doyle.

Pre-ride video of Edreys Wajed and Eva Doyle – “I’m a historian; I’m a retired teacher; I’m a newspaper writer for the oldest black newspaper in Western New York, The Criterion; and it’s an honor for me to be on The Freedom Wall.” 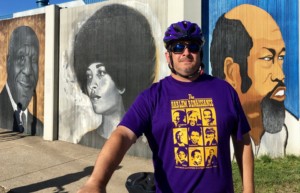 Another pre-ride treat was our first-Monday giveaway from our presenting partner Independent Health, whose RedShirt team returned this month with bike lights, always appreciated. 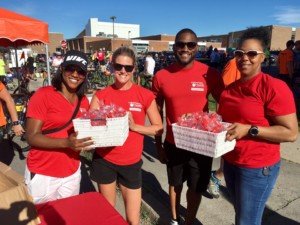 Rolling out, we rode around the corner past the entire Freedom Wall, up to Hamlin Park and down through Cold Springs, where residents on streets like Butler and Woodlawn including waves of kids have always come out in droves to join the ride and greet us as we pass. We sent love to Freedom Wall honoree and nearby Winslow Block Club leader Mama Charlene Caven Miller, who’d planned to speak to riders when we stopped at Wohlers and Best but block club duty called her to work. 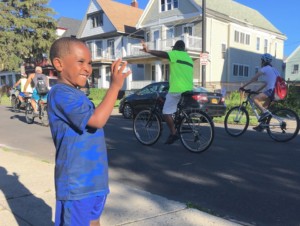 The speaker at our second stop in the First Ward prepped us perfectly for our turn up the Michigan Street African-American Heritage Corridor, which we rode in its entirety back to The Freedom Wall:

Video of Valeria Alridge – “I hope that you all will have an opportunity to explore these places as time goes on, because this is what makes our community great – information, understanding, and knowing where we came from, so that we all can chart where we’re going in the future.”

Rolling up Michigan through the Fruit Belt, we were again greeted by another bunch of kids who seem to always be out on their bikes around the McCarley Gardens apartments – we hope they’ll be in the ride when we return to the Fruit Belt for our second annual Mulberry Block Party Ride on August 5th! 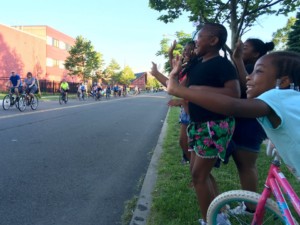 Back at The Freedom Wall for post-ride fellowship, we rocked to the beats of DJ Muah including rounds of birthday wishes to Slow Roll Squad member Veronica Bell, who struck a perfect pose below between Eva Doyle and Shirley Chisholm. 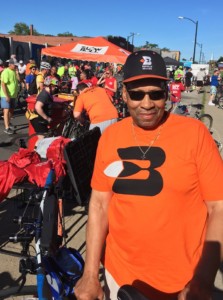 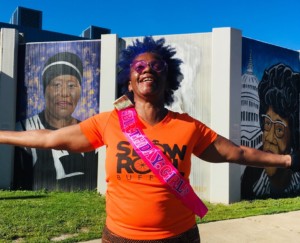 …moving onto next Monday, July 8th – our tenth of 26 straight free and inclusive Monday night community bike rides marks our debut at the Frederick Douglass Community Center on the corner of Clinton & Jefferson.

This Monday’s 10-mile roundtrip route includes stops in Willert Park and the Hydraulics; neighborhoods on this route include Emslie and downtown along major streets Clinton, Fillmore, William, Pearl and Sycamore. 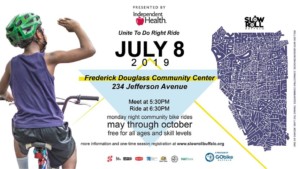