Home/News/Waterkeeper Ride in Review
Previous Next

Warm thanks to all who made our Waterkeeper Ride another beauty! Shout out to Buffalo Niagara Waterkeeper for showing up to share the many ways they protect and promote our waterways along last night’s route, from our host venue Broderick Park on the Niagara River to the Scajaquada Creek Corridor and their downtown office; props to our squad for steering the ride down the Main Street bike lane along the metro rail tracks – while it took a while, it’s worth showing everyone that bikes have rights and lanes on Main as well.

Thanks also to Rich Products for its steadfast support of Slow Roll and GObike Buffalo, including accommodating this ride taking place beside their headquarters – Rich’s has done a lot for Broderick Park, too, which is now in beautiful shape, as shown here in this drone image of our afterparty by regular rider David Sanjeev. 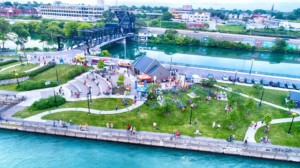 We started from the bottom aka “Foot of Ferry” and lined up on Niagara Street, rolling east on Ferry into Olmsted’s brilliant parkway system – Richmond, Bidwell, Chapin and Lincoln to Hoyt Lake in Delaware Park, where Waterkeeper delivered their message:

Video of Buffalo Niagara Waterkeeper Community Outreach Coordinator Marcus Rolsten at Hoyt Lake – “The construction of the 198 Expressway severed our Olmsted-designed Delaware Park and cut a community off from their water; now, some may see a neglected and damaged and dirty waterway, but the community sees a potential for a revitalized Scajaquada Corridor.” 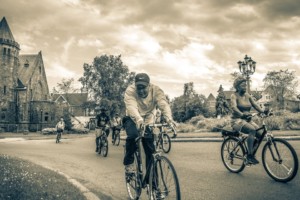 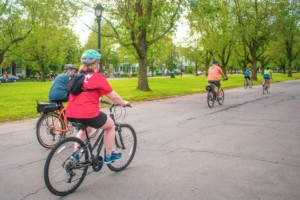 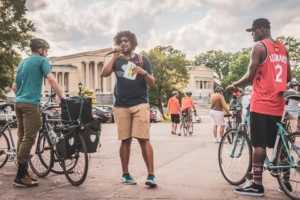 From there, we rolled around the Albright-Knox Art Gallery down Elmwood and over Delavan to Main, which we rode downtown to Waterkeeper’s headquarters, where in addition to word from Waterkeeper Director of Community Engagement Chris Murawski we also heard from Teen Treks co-owner and Slow Roll Squad member Tyler Madell about the last call for their contest for teen Slow Rollers to earn a long-distance trek with them this summer. 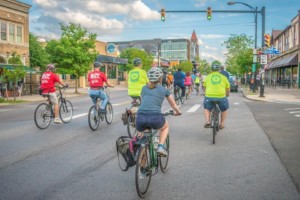 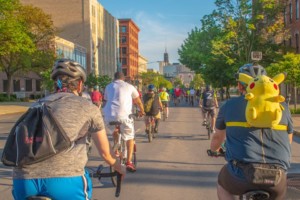 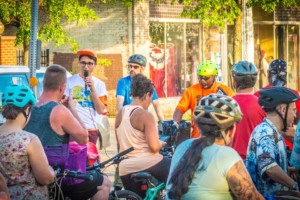 Our third and final leg of the ride began with a slow roll down the bike lane alongside the metro rail tracks, to assert our clearly-paved yet often-disputed-by-drivers rights to this road; from there we rode Chippewa to the under-construction Complete Street stretch of Niagara and back to Broderick Park, where Ismail & Company brought the beats and spirit for our Buffalocal afterparty. 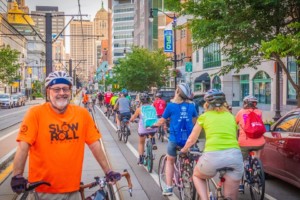 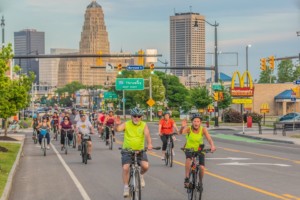 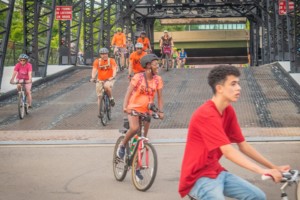 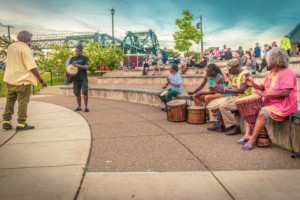 Moving onto next Monday, our ninth of 26 straight free and inclusive Monday night community bike rides marks our second annual ride on the Monday nearest to Independence Day at The Freedom Wall, which honors 28 local and national civil rights leaders as commissioned by the Albright-Knox Art Gallery (AKAG) Public Art Initiative in partnership with the Niagara Frontier Transportation Authority (NFTA).

From AKAG: “The corner of Michigan Avenue and East Ferry Street in Buffalo is the northern entrance into the Michigan Street African American Heritage Corridor: a nexus of the city’s deeply rooted African American history. It marks the intersection of the honorary Richard Allen and Harriet Tubman Ways, and it is home to Bethel African Methodist Episcopal Church (Bethel AME). Organized in 1831, Bethel AME is Buffalo’s oldest black religious institution and served as a critical station on the Underground Railroad.”

Before the ride, we’ll have another giveaway from our presenting partner Independent Health. 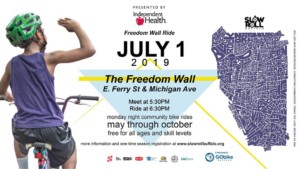