Home/News/Buffalocal Ride in Review
Previous Next

Hardcore crowd last night, big ups! 87 appears to be the official count of riders, including kids, and among them first-time Slow Rollers like 11-year-old Vincenzo and 10-year-old Tyler below, whose mom Maria said they were intent on honoring their commitment to ride with us. One catch – they didn’t have helmets; enter our presenting partner Independent Health, which has provided GObike Buffalo with helmets for such occasions. 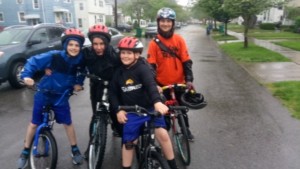 With hard rain yet no sign of lightning, we proceeded from Brookdale Park through South Park and up Hopkins Road, including the overpass that local kids call the “Hopkins hill,” a longtime proving ground for young cyclists. 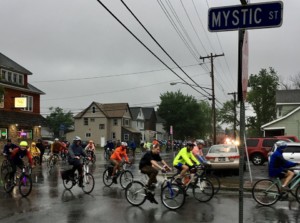 From The Triangle down McKinley Parkway and past Cazenovia Park – where we’ll return August 19th – we rolled up to the recently-expanded Imperial Pizza on Abbott Road, the official pizza of Slow Roll Buffalo, where we’d moved our Buffalocal afterparty since we doubted many would wanna stand around Brookdale Park in the rain.

Thanks to Imperial for having us on short notice – including many dry folks who attended only the afterparty, always welcome! 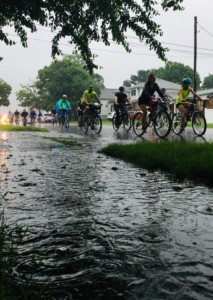 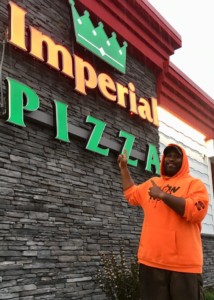 While riders always enjoy passing connections with passersby on porches, there were few folks out on a night like this – one person posted photos in our Facebook group saying, “Slow rollers, you are crazy! We loved your riding enthusiasm tonight from our dry house!”

One’s crazy is another’s enthusiasm, and we sure have plenty of the latter, let’s keep it goin’!

Before we move onto next Monday, we have another free and inclusive ride this Friday in our first of two Clarence Pedal Parties with Discover Main Street, this one meeting at West Shore Brewing Company (10995 Main Street, 7pm start). Our 11.5-mile ride will include some inclines along roads both residential and rural, including continued advocacy for their trail system and Saturday morning group rides from the Clarence Hollow Farmer’s Market.

Come Monday, we’ll return to East Parade Avenue on the eastern edge of MLK Park four our free and inclusive Juneteenth Ride, tied to the Juneteenth of Buffalo Festival happening this weekend in the park. Slow Roll squad along with East Side Bike Club & Reddy Bikeshare will ride in Saturday’s parade down Genesee Avenue into the park, where GObike Buffalo will again a tent both Saturday and Sunday as part of the celebration for the oldest known observance of the ending of slavery in the United States.

This Monday’s 10-mile roundtrip route includes stops on William L. Gaiter Parkway, which is named after one of the founders of Juneteenth Buffalo, and at the Juneteenth headquarters on Genesee & Moselle Streets; neighborhoods on this route include MLK Park, Grider, and Genesee-Moselle along major streets Fillmore, East Delavan, Walden, Genesee and Sycamore. Buffalocal afterparty on East Parade Avenue with fellowship, food, drinks and music, get in gear and join us! 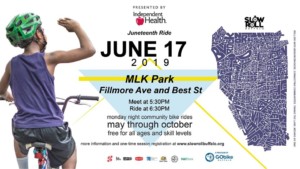