Thanks to all who overcame the cool wind to be welcomed by the North Lovejoy Coalition of Block Clubs into the tucked-in gem of Walden Park! We’re grateful for their invitation. We lined up after the Little League game got going in the park and got some starting words from outgoing Lovejoy District Councilmember Richard Fontana:

“The residents of this neighborhood all got together and decided to build this park with the city’s help…a true testament to working together to get things done.”

Thanks again to our mainstay presenting partner Independent Health for another pre-ride giveaway, this time a touchscreen bike bag seen below on squad bikes… 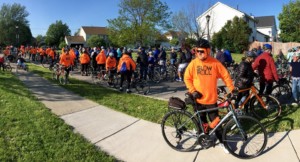 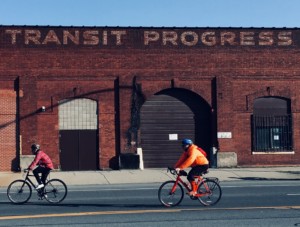 ..we lined up on Bakos Boulevard and set out up Stewart and over Doat to Bailey, over the tracks that mark the “North” in Lovejoy and by the old Wildroot building, illuminated by both squad member Fr. Jud Weiksnar’s pictures here and in our open Facebook group  along with his regular-rider sister Melissa’s comment that Nat King Cole once cut a commercial for the hair care company that was founded here in 1911. Although it was sold to Colgate-Palmolive in 1959 for $10.5 million, the Wildroot aka Western New York Foundation founded in 1951 remains one of the largest foundations in Buffalo.

Wildroot building in The Buffalo News – “It started as the world’s largest cake kitchen, and then it was the biggest hair tonic factory on the planet, and now it is empty…” 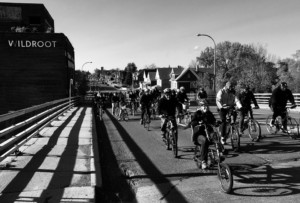 After stopping on Goethe in Lovejoy and hearing from Pat Coghlan of the Buffalo Fire Historical Society at William and Ogden, we headed down to Kaisertown and westbound on Clinton, where we passed two future host venues in the corner of Clinton & Weiss (October 21st) and Niagara Frontier Food Terminal (September 16th). 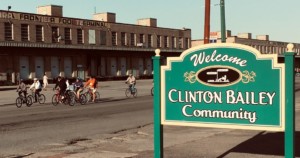 Props to the many junior riders whose little legs have to cycle many more times than the grownups; also to the six grownups including four squad who made a forcefield around the last kid rolling back into Walden Park, where he was one of the last ones to leave the afterparty, too!

We’re honored that so many parents trust us to guide their young kids across 10 miles of our streets, and with this comes a call to all to be careful with kids on the ride – while there are wobbly riders of all ages, the wee ones warrant the most watch. Keep a close eye on the kids, and stay with the ones you bring. 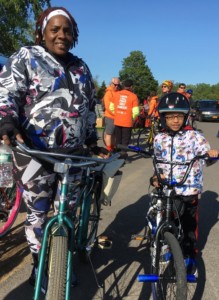 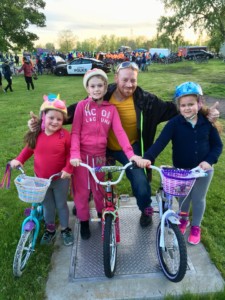 Another note on safety, repeating our regular message on the ride to Leave room on the left for Squad at all times. Volunteer Stephanie Anderson was injured this week, and wrote this afterward in our Facebook group: “After my nasty fall tonight, I am nursing a swollen ankle and a bruised hip yet I am in good spirits. Thank you for your concern and prayers.

“Reminder: Always be mindful of Slow Roll’s safety precautions such as staying right to the double yellow lines and please listen to my fellow Squad members. We are here to keep everyone safe. Hope to see you next Monday!”

Before we move onto next Monday, we have another free and inclusive ride this Friday in our second annual Ken-Ton Pedal Party! Presented in partnership with Handlebars Cycle Company with support from C&S Companies and hosted by Caputi’s Sheridan Pub (2351 Sheridan Drive, 7pm start), our 12-mile roundtrip route will include a stop at the Tonawanda Rails to Trails for recognition of a recent award for engineering excellence. Caputi’s is right off the trail, join us!

Come Monday we return to beautiful Brookdale Park in South Buffalo for our Buffalocal Ride, named after Try-It Distributing’s new Buffalocal campaign, which “represents a collective of local businesses that brew beer, make cider, love their neighbors and have fun while doing it all.” 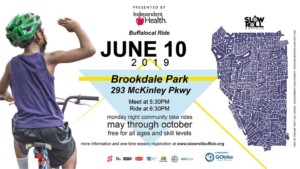