Our free and inclusive Restore Our Community Ride this coming Monday, May 13th, hosted by the Buffalo Museum of Science (1020 Humboldt Parkway, 6:30pm sharp start) continues the focus of our first three rides on the streets around Buffalo’s “Freeways Without Futures” – Kensington and Scajaquada – as designated by the Congress for the New Urbanism (CNU) and featured on GObike Buffalo‘s upcoming sixth annual SkyRide, a fundraiser bike ride on Sunday, May 19th, providing riders the opportunity to explore the past, present and future of Buffalo’s roadways through a ride highlighting our legacy highways.

The CNU “Freeways Without Futures” report reads, “Not only did this pair of expressways deprive Buffalo of quality parklands, but it also severely damaged the neighborhoods along these corridors. The demolition of thousands of homes and businesses in Buffalo’s East Side to make way for the Kensington Expressway displaced city residents, while NYSDOT seized parts of Delaware Park on the justification that it was ‘vacant land.’ Property values in the Hamlin Park neighborhood, situated where these two highways connect, plummeted and remain among of the lowest in the city. Many local businesses in the nearby Jefferson and Fillmore business districts were shuttered as residents moved away.”

This Monday’s ride is named after the Restore Our Community Coalition (ROCC), “a group of organizations and institutions dedicated to the revitalization of neighborhoods along Humboldt Parkway.” Famed landscape architect Frederick Law Olmsted designed Humboldt Parkway as a way to connect Delaware Park to Parade Park – now MLK Park – without having to leave the park system. The parkway and its six sprawling rows of trees similar to Bidwell and Chapin Parkways also leading to and from Delaware Park were torn up in the late 1950s to make way for construction of the Kensington and Scajaquada expressways.

For decades, ROCC has been building support for a plan to reconnect their neighborhoods by capping the Kensington between Delavan and Best streets – from the connection with the Scajaquada to MLK Park – restoring 14 acres of land to the community in what that many stakeholders including public officials consider a shovel-ready project. 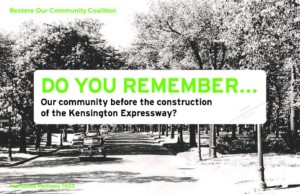 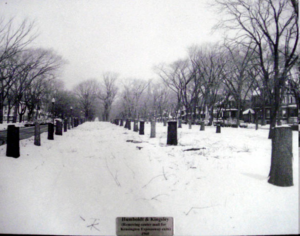 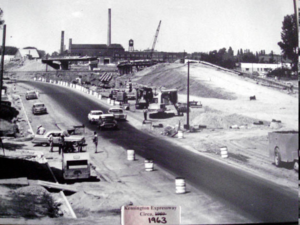 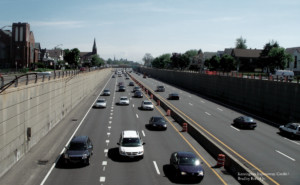 Our Restore Our Community Ride will focus on these neighborhoods; here, learn more from ROCC and Hamlin Park Taxpayers Association leader Stephanie Barber-Geter, who will take the bullhorns to welcome us to Hamlin Park on our first stop.

What inspired the founding of ROCC, and what is its mission?

The mission is to restore the community – the road is one part of it, it will unite the streets and get people to reinvest in neighborhood structures. It’s also about jobs – getting people back to work and back into business in the community, also to lift the spirits of residents who want a livable, walkable neighborhood, bringing back the flavor that Mr. Olmsted intended when he designed the parks. People had lots of gathering spaces, because when you live in a park, it’s a whole different kinda feeling.

There were many people interested on their own about how to rectify this problem that’s eroded our properties and neighborhood, all people who’d worked together before on different issues. The inspiration for getting it going was neighborhood leader Clark Eaton, who in the late-70’s was the first to put it on the table and say, “Here, let me show you all what I’m thinking.”

What are the greatest challenges to achieving that mission?

One of the greatest challenges is focus – keeping people focused on what’s first and second. While the road is first, we’re bringing people together around a whole host of issues – jobs and health being primary, also reenergizing our business districts. You get mission drift easy in Buffalo – someone will say, “Oh, you wanna cover the 33, how about getting involved in the waterways?” It’s related, but for us, not right now.

What is ROCC’s greatest accomplishment to date?

Getting people talking about this, excited about the fact that this could happen in Buffalo – even though it’s happened in 15 other American cities, it’s now our turn. More and people people are agreeing.

What do you say to those who want to hold out for full removal of the highway instead of the perceived compromise of capping it?

Well, I say to them that this group of people who make up ROCC discussed that issue and angle a long time, and we came to the point that getting the political support we need to bring the resources here to make that happen, wouldn’t happen if we stayed in the argument about cutting off downtown Buffalo – that’s important, but not as important as fixing our neighborhoods.

We’ll still be talking about filling it in 20 years from now; for now, we agreed on what we could agree on, to unite the neighborhood. It’s usually people who don’t really live in the neighborhood who argue for that expanded scope.

What are your favorite fun facts that few know about ROCC?

That it’s a group of people who meet every two weeks, and they agree to all take leadership roles. I like the fact that there are many leaders who play that role really good. We do things that get people involved, have a lotta fun, and we’re about raising awareness to make people understand and believe that we can fix this stuff – 33, 198, Skyway out on the lake, we can fix that, too. People haven’t always felt that way, so it’s a fun thing to watch us evolve as an overall community.

They can put their hand up and say they wanna get involved, and they’ll find lots of ways. They can come to our headquarters at 60 Hedley, go to ROCCbuffalo.org, look us up on social media.

It’s becoming a great, multicultural, cross-generational project and dream that as a whole community we can celebrate – we don’t have many of those. They’re usually driven by business or government – this is driven by the people, and that’s a good thing, isn’t it?

Sure is. Is it fair to feel that the momentum is real, that we’re close to something big happening?

I do think so, I really do, because politically, things are lining up. Even though it’s noisy at the top, there’s a lot of consensus that as a country, we gotta deal with our failing infrastructure. The local and state legislators are lining up and saying that the shovel-ready projects will go first – and that’s where we are, shovel-ready.

Every day, someone says, “Do you really think they’ll do this?” I say we need to transfer the thinking from “they” to “us” – we’re gonna do it. People pause and take a deep breath and say that it’s such a big project – I say, you can drive that whole distance in less than 10 minutes, walk it in less than a half-hour, so in the scope of our whole region it’s small. We can connect with it because it’s aligning six city neighborhood that we can reconnect, which is a good thing. 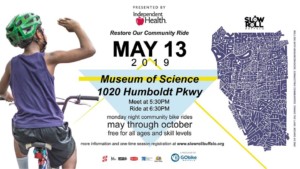 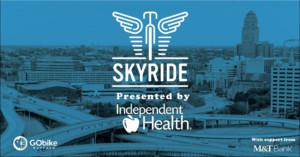