This coming Monday, May 6th, brings Slow Roll Buffalo’s Season-Opening Ride, beginning our fifth year of presenting free and inclusive community bike rides every Monday from May through October. Our Season-Opening Ride host is Hostel Buffalo-Niagara (667 Main Street, downtown, ride starts at 6:30pm sharp), which has become part of the fabric of downtown Buffalo and the Theater District since its founding in the mid-90’s as a nonprofit communal homestead welcoming travelers from around the world to its beautiful hundred-year-old home.

When was the building built, what was its original function, and when did the hostel move in?

The building was built in 1905 by E.B. Green, was a light mercantile til the 40’s, then became Norban’s, a “self-serve” department store. They sold everything from little boys’ Sunday suits to women’s wear – you could try things on yourself – which was a very new idea at the time. Eventually they got into sporting goods, and rumor has it there’s sports and nature-themed murals lining the walls from floor to ceiling, from Main to Washington Street – we’re told someone took pictures on them during the renovation, but we haven’t been able to find any evidence of them.

In the late-80’s, Norban’s closed and it became a Rainbow Department Store until 1989, then sat vacant for many years until the hostel formed as a not-for-profit organization in 1992 and was able to purchase the building, which was falling into disrepair from an absentee landlord in New Jersey. With some fine-tuning and aligning of the stars, the raw department store space underwent $1.5 million in renovations to form specifically the hostel as it is today, and which is actually only occupying a half of the entire building that was once Norban’s.

There’s a great quote from then-Mayor Masiello in The Buffalo News calling it “Another building block in our (downtown) foundation.” It welcomed its first guests in December of ’96; 22-plus years later we’re still running strong! 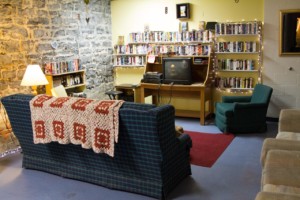 How does the hostel contribute to our community?

On top of providing affordable travel accommodations which we feel is hand-in-hand with affordable housing, we’re also like an alternative visitor center to the region, one that’s open 365 days til 1030pm. Through the kindness, compassion, and well-rounded knowledge of our local staff, we create thousands of ambassadors for Buffalo from all over the world. The majority of our guests come here to see Niagara Falls, but because of the hostel they come and visit via downtown Buffalo. They are usually taken back by how unique and special this place is when they walk in.

The hostel itself has developed into a cultural asset, a place for all walks of life, mixed with all different kinds of events taking place hosted by different communities. It’s a nonprofit geared for affordable travel – which should be a right for everybody to be able to see the world, not just for those who can afford fancy hotels. Not that we don’t love our fancy hotels – we do, but our mission is to provide affordable, accessible travel for a more communal and interactive experience through providing a fully equipped kitchen and lounges for our guests from all corners of the world to converse and interact with each other, breaking down barriers of fear and building relationships. We’ve even had a few marriages that have come out of guests meeting each other here.

We also host large community and university groups of all kinds coming to explore Buffalo – whether for Habitat for Humanity working on houses; Bike the US for the MS Bike tour taking a break from riding across the country; film crews working on an independent movie; or architecture students studying downtown buildings or working on projects at Silo City. We’re perfect for large groups to use as a homebase visiting and doing great things in our city.

Also, in the spirit of good neighbors, we also have our local chapter of Food Not Bombs, a 100% volunteer group that directly addresses food waste locally by intercepting and salvaging food that would otherwise go to waste and share it as a way of protesting war, poverty, and overall monetary displacement through connecting with our fellow neighbors by providing a healthy vegan meal to our downtown community, sharing bread and produce donations from the Lexington Coop.

At the hostel, we now have a monthly variety show and open mic that welcomes everyone looking to perform whatever it is that they do, run by Jackie Zee and is snowballing into quite an end of the month event. We just hosted a very cool Rise UP party with Aaron and Lonnie of PUSH Buffalo, and the following week had a women singer-songwriter showcase night.

Through the years we’ve hosted great events for GOBike Buffalo, Just Buffalo Literary Center, and Open Buffalo. We love hosting events for all our different groups and communities, which also further connects our guests directly to local communities in our city. 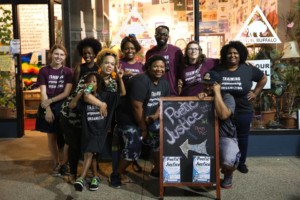 What other events happen at the hostel?

The Hostel’s BOX Gallery just had an art opening for UB MFA Candidate John Van Houten, who has flooded the room with hundreds of paintings of obscure and demented high school yearbook portraits for his thesis show, “Youth In Crux” – up through May 31st – aligned with an intimate avant-garde showcase in the backroom with performances by Malaysian vocalist Siew-Wai Kok with Hallwalls Music Director Steve Baczkowski and adventurous drummer Jim Abramson, also DC abstract hip hop project Model Home was in town to perform featuring Buffalo native Pat Cain on electronics who just released a new LP vinyl, which will also be available when they play Duende Sunday night!

All May we will be having our pay-as-you-feel Hostel Bike Breakfasts out front every Wednesday from 7:30-10am, with Breadhive bagels and gluten-free Two Wheel Bakery scones and tofu scramble, and as always an attempt to make the worlds best oatmeal and super-strong coffee! 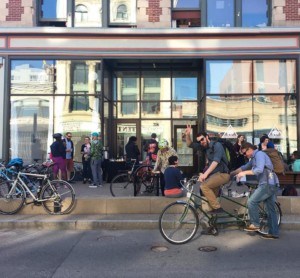 The Hostel hosts a Bike Breakfast every Wednesday in May

Also starting in May, the brand new Buffalo Bike Tours will meet here throughout the spring and summer, to provide quirky, alternative, and powerful history lessons about the city and events that have helped shaped the country’s history to date. Now equipped with a newly refurbished fleet of blue tour bicycles thanks to the folks at GOBike Buffalo’s Community Workshop. Check out buffalobikestours.com to book a tour.

What are your favorite fun facts that few know about the hostel?

That it’s really a grassroots phenomenon. Back in the late 80’s, our founder Suzanne Toomey-Spinks returned to Buffalo from traveling abroad and decided the city should have a hostel. She organized a group of folks to form a not-for-profit, which incorporated in 1992. It’s a miracle it even got started, and when it opened in 1996, no one thought it would exist longer that a few years especially at that time in the mid-90s – downtown was hurting, but it survived through lows and now hopefully through the highs, as were still here almost 23 years later.

We’re really a project of Gwen Howard, who’s now the President of the Buffalo Niagara Preservation Board. Gwen was then working for Buffalo Place and for a partner organization Working for Downtown, which encouraged businesses to be downtown. The Hostel was one of her first projects right out of school; she went from finding the building to finding the landlord to acquiring the building and to designing it to be specifically a hostel as it is now.

There’s great history here of how it came about, and we’re still existing today and with the lease coming up – the building was sold to the city back in the late 90’s – it’s important that everyone sees what an important asset this place is for Buffalo to have a hostel and one that is so embedded with our city, plus that it’s one of the highest-rated and one of strongest and longest-running ones in the country, offering affordable accommodations to those who visit and cultural diversity to our beloved Theater District, the city, and region at large. We hope to stay here indefinitely and continue our mission. 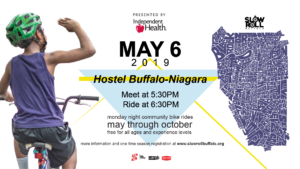