Our free and inclusive Labor Day Ride this coming Monday, September 3rd (6:30pm sharp start), will be hosted by the Discovery Heritage Center at 100 Lee Street in The Valley, by the Buffalo River. Chosen as our host to honor the holiday and local labor history, the center houses a host of nonprofits dedicated to such honor, including the Steel Plant Museum of Western New York, Western New York Railway Historical Society, Erie Lackawanna Historical Society, The Buffalo Irish Genealogical Society, Buffalo Lighthouse Association, The Nickel Plate Road Historical & Technical Society and more. For some background on the building and these tenants, we turned to Joe Koscis, president of the Railway Historical Society.

When was the building built, what was its original function, and when did Heritage Discovery Center move in?

The Heritage Discovery Center (HDC) was established by the Western New York Railway Historical Society in June 2011. The 22,000 square-foot building was originally constructed in 1983 by the Buffalo Color Corporation as their main office complex.

Buffalo Color once occupied 65 acres of industrial property along the Buffalo River and was the county’s largest manufacturer of dyes, with indigo dye for blue jeans being one of their most important products. The company closed in 2003 and the plant stood vacant for 6 years.

In 2009, the site was declared a brownfield, and the Honeywell Corporation, as the legacy owner, was responsible for its remediation. At the same time, the WNY Railway Society began looking at the site as a possible location of our museum. After purchasing the building in 2011, with the help of the Wendt Foundation, the interior was fully renovated and the Steel Plant Museum of WNY was our first organization to join in our vision for a museum honoring the railroad and industrial heritage of our region.

What inspired the founding of HDC?

In addition to preserving our valuable railway heritage, the prime mission of the WNY Railway Historical Society is to establish a venue that the public can visit to see our collections. The Society was originally formed in August 1980, and since then has collected nearly 40 pieces of rail equipment including a steam locomotive, two diesel locomotives, several cabooses, freight cars and 20 passenger cars. Several of our passenger cars are in charter service operating on excursions in Medina.

Many pieces in the collection are one-of-a-kind, being the last one in existence such as our 1923 Pennsylvania Railroad 2-10-0 Steam Locomotive, which is the last of 498 built by the railroad. The Heritage Discovery Center was established to provide the venue to complete our mission to establish our museum, to allow the public access to our collections and to consolidate the cars and engines in a safe and secure environment.

How does the HDC contribute to our community?

The HDC has taken a 16 acres of vacant industrial land to develop into a world-class museum venue, which will enrich the local neighborhoods and be a catalyst for economic redevelopment in the city. Already planned for the site in addition to the museum development will be the installation of a fishing pier and kayak docks along the 700+ feet of the Buffalo River shoreline, as well as the development of an entertainment and restaurant venue to provide a constant source of revenue for the museum.

Any interesting facts about HDC that few people know?

One of hidden gems of the HDC is our Research Library on the second floor of the museum, which is managed by the Buffalo Irish Genealogical Society (BIGS). The library houses the book and paper archives of our member organizations, and is available by appointment for researchers. BIGS also maintains an extensive collection of genealogy research materials, and are experts at tracing down family trees and long-lost relatives.

BIGS has also to date, indexed over 20,000 railroad employment records and put them online for researchers as well. In addition to the HDC, the WNY Railway Historical Society has preserved two local historic railroad stations. The former Lehigh Valley Railroad Station on South Long Street in Williamsville was originally built in 1896 and has bee restored by the WNYRHS, and is designated as a local landmark. The WNYRHS has also preserved the former Buffalo Rochester & Pittsburgh RY Station & Freight House in Orchard Park. This National Historic Landmark was built in 1912. 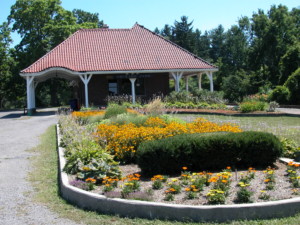 What other events happen at HDC?

The HDC hosts a myriad of events throughout the year. On the first Wednesday of each month, the Steel Plant Museum hosts their Wednesday Speakers Series at 6pm, presenting local historians and authors with stories of local interest. The meeting room venue is also used by local group for meetings, and is available to the public to rent as well. The HDC has hosted wedding receptions, local history conferences and three major national conventions on the site over the last five years. The Heritage Discovery Center is open every Tuesday, Thursday and Saturday from 10am to 5pm. Visit the HDC Facebook page or the WNYRHS Facebook page for up-to-date happenings. 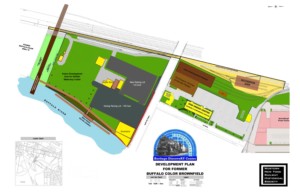 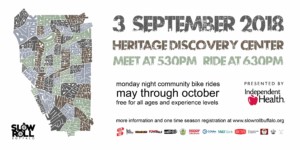