This coming Saturday, August 25th, we return to Clarence for another free and inclusive Saturday Bike Stampede, our second of three rides in the town this year – the buzz is clear in the Clarence Bee, whose ink this week includes a preview of our event as well as news that bike lanes are coming to both Main Street and Sheridan Drive.

This time we’ll have a first-time host in Brennan’s Bowery Bar (4401 Transit Road, 3pm sharp start, Buffalo bike train leaving MLK Park at 1:30pm after the noon East Side Bike Club ride), from which we’re excited to ride Transit, Sheridan and Main, with many residential areas in between our 13-mile route with a couple inclines – which are a bit more work for casual riders than the relative bunny hills of Buffalo – as detailed below along with the inspirations behind these rides by regular Monday rider and Discover Main Street leader Noel Dill.

What is the mission of Discover Main Street?

The mission of Discover Main Street is to brand Main Street in Clarence as a destination. To increase traffic at Main Street Businesses, we feature businesses and events throughout the year and promote continued development of the Main Street commercial district.

To much of Western New York, that may not seem like a big deal. Clarence is perceived to be a monied community. But the reality is that the Main Street Clarence Business District had suffered decades of decline, and there wasn’t much being done about it. A lot of the uses on Main Street, like motel properties, no longer had any economic relevance, and traditional hamlets like the Clarence Hollow needed redevelopment.

About five years ago, there started to be a consensus among stakeholders that something needed to be done. The Clarence Chamber of Commerce, the Clarence Hollow Association, Discover Main Street and the Clarence IDA all started working on a plan. Town of Clarence, to their credit, listened and became an active participant.

How did you bring bicycling into this work?

Pretty early on, we recognized the importance of the bicycle to our vision of Clarence Main Street. Unlike many other Main Streets, including East Aurora, it wasn’t truly walkable. Our Main Street is over 6 ½ miles long, and the Town Code for many years required large setbacks from the road. While those codes are changing to bring buildings up to the road, the reality is that these setbacks discouraged pedestrians from visiting businesses. But being car-centric had its problems too, because it was too hard to discover something new when you were whizzing by at 45 mph.

The bicycle solves those problems. It’s a much more intimate way to view your surroundings. In a car you are removed from the sights and sounds and smells of the world around you, but with a bicycle you are connected and engaged.

The challenge was developing a bike-friendly Main Street. Clarence has some wonderful bike paths, but there was no bike infrastructure along Main Street where the businesses were. So we set out to change that. We held our first bike event – the Discover Main Street Fun Ride –  in the fall of 2015. It was basically a down and back along the length of Main Street, to build awareness.

In 2016, with funding from the Clarence Rotary and the Clarence Hollow Association, we helped build out our first bike infrastructure with the installation of a bike corral and repair station at the Clarence Hollow Farmers’ Market, where Main Street connects to the Bike Path. And we started working in earnest to make sure bike lanes on Main Street from one end of Town to the other would be a part of the plan that became Vision: Main Street. 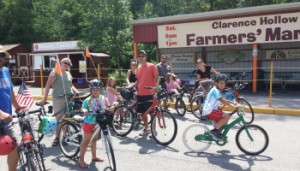 What led you to partner with Slow Roll?

We saw that big things were happening in the city with Slow Roll Buffalo. We recognized that there was magic happening, and that the mission of bringing communities together matched up well with what we were hoping to accomplish in Clarence.

Melany Arrison was instrumental in advocating for us to partner with Slow Roll. As the bicycle advocate on our team, she is a true believer in a bicycle as a vehicle that unites our community, propelling us forward to a greener, and more vibrant community of connected – and heart-healthy – citizens.

How have you built on the success of past rides with us?

Our First Slow Roll event was a Friday Night Pedal Party at Murphy Browns a year ago, and it opened a lot of eyes in the Town. The response was tremendous, with over 500 riders participating. It was a first chance for many outside the Town to see how our Main Street was changing, and the turnout also helped show community support for a bike-friendly Main Street.

The Vision: Main Street plan adopted by the Town kept the bike lanes intact, and we hope to have the first three miles – from Transit Road to Sheridan Drive – up and running later this fall.  The Town has also started to explore other bike-friendly elements, such as linear parks and neighborhood bike connectors, that would tie into the Main Street bike lanes.

With the momentum starting to build, it made sense to expand our partnership with Slow Roll. We’re extremely excited to show off our town and the changes underway.

What should riders expect in this Clarence Bike Stampede?

Something completely different. Past visits to Clarence have taken riders through the Clarence Hollow, Central Main and off Main Street into Clarence Center. This ride is featuring Main Street’s western Hamlet of Harris Hill, an area that had in many ways been forgotten decades ago as the development of the Eastern Hills Mall and the Transit Road retail corridor siphoned away customers from area businesses. Now that process is reversing itself, with Malls falling out of favor and Harris Hill getting some well deserved love. There’s still a lot of work to do, but sidewalks are being added to make the area more walkable, and in just a few weeks Main Street will be getting fresh pavement and bike lanes from Transit Road through Harris Hill as far as Sheridan Drive.

We’ll start the ride passing the Mall before diverting north through the Sheridan hills, and begin a meandering path through one neighborhood after another, including Loch Lea, Rolling Meadows, Highland Farms, Farmington Woods, Meadow Lakes and Fox Trace . We’ll have a climb back up before exploring Harris Hill proper, passing Nativity Church and coming back along Main Street to an after party featuring harmonica phenom Noah Moses.

We’re certainly excited about our host too. Brennan’s Bowery Bar has a rich history, tracing it’s origins back to the Bowery district in Lower Manhattan where it first opened its doors in 1888. The Shatzel family has operated Brennan’s in its current location since the 1970s, and its combination of old Irish fare and warm hospitality makes this a venue we’re super excited about. It’s a location many in WNY already know well, and it’s situation in a corner of Clarence that’s easily accessible from Buffalo. We’re hearing from many Slow Roll regulars that plan to ride out to this Roll. If you can’t come by bike, there’s also virtually unlimited parking at this venue. Come join us for a late summer afternoon ride that’s sure to put a smile on your face! 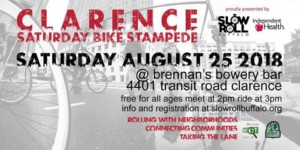